The Indians released reliever Matt Capps, according to a tweet from the team.  The move enables them to avoid paying a $100K retention bonus, notes Paul Hoynes of the Cleveland Plain Dealer, but the team will continue to negotiate with him.  The Tribe released Daisuke Matsuzaka yesterday for the same reason.  Here's the full list of Article XX(B) free agents, who today must be placed on the 25-man roster, released outright, or given the $100K bonus if sent to the minors.

You can check out MLBTR's complete list of current free agents here.

Reliever Matt Capps and starting pitcher Chris Young both signed minor-league deals with new teams this offseason as Article XX(B) free agents, and they both face decisions as the end of spring training nears. Neither is expected to make the 25-man rosters of their new teams, and if they don't, they can become free agents, or they can accept minor-league assignments, which come with $100K retention bonuses and opt-out dates of June 1.

Capps is still in big-league camp with the Indians, but the Indians have informed him he won't be on their 25-man roster. He is unsure whether he will accept an assignment to Triple-A Columbus or catch on with another team, MLB.com's Jordan Bastian reports. For now, Capps is in limbo. "I've never been in this situation," he says. "I'm not really sure what to think or where to go or what to do. So, I'm just kind of here right now." Unsurprisingly, Capps says he would accept a big-league opportunity elsewhere before reporting to Columbus. Capps pitched 29 1/3 innings with the Twins last season, with a 3.68 ERA, 5.52 K/9, and 1.23 BB/9.

Young may soon be in a similar situation with the Nationals. He can trigger an out clause in his contract on March 24, before his next spring training start, Adam Kilgore of the Washington Post notes. [Young's out clause is technically distinct from those of most other Type XX(B) free agents, who must be notified by March 26 whether they will make their clubs' 25-man rosters.]

Like Capps, Young indicates that he would prefer a major-league job elsewhere to a minor-league assignment. "I do feel like I’m a big league pitcher," he says. "To turn down a big league opportunity to go to Triple A is probably not in my best interest." Kilgore lists the Padres, Angels and Twins as possible destinations for Young. Young pitched 115 innings for the Mets last season, with a 4.15 ERA and 6.3 K/9 and 2.8 BB/9. He is an extreme fly-ball pitcher, however, and may not be the best fit in home-run-friendly ballparks.

The Indians have told Daisuke Matsuzaka and Matt Capps that they'd like to keep them in the organization, Paul Hoynes of the Cleveland Plain Dealer reports. Neither pitcher will make the team's Opening Day roster, but Matsuzaka said he intends to remain with the Indians, Hoynes reports. Meanwhile, Capps has yet to decide whether he’ll stay with the Indians or elect free agency.

Here are some more links for Monday…

The Indians announced that they signed Matt Capps to a minor league deal with an invitation to MLB Spring Training. Kelly Kinzer of Kinzer Management Group represents the right-handed reliever.

Seventeen years ago today, Cuban defector Livan Hernandez inked a four-year, $4.5MM contract with the Marlins, which included a record $2.5MM signing bonus. Hernandez made his Major League debut just eight months later as a September call-up. Hernandez was instrumental in the Marlins' 1997 World Series title run earning NLCS MVP honors and being named the MVP of the Fall Classic after winning both of his starts against the Indians. Hernandez has found steady employment ever since donning the uniform of the Giants, Expos, Nationals, Diamondbacks, Twins, Rockies, Mets, Nationals (again), Braves, and Brewers. The 37-year-old right-hander pitched for the latter two clubs in 2012 compiling a 6.42 ERA, 6.4 K/9, 2.1 BB/9, and 2.0 HR/9 in 67 1/3 innings out of the bullpen. The Praver/Shapiro client has said he wants to pitch in 2013. In other other news involving MLB's Florida teams:

The Twins have declined their 2013 club option for Matt Capps, the team announced. The option was worth $6MM and veteran right-hander will instead receive a $250K buyout.

Capps, 29, pitched to a 3.68 ERA with 5.5 K/9 and 1.2 BB/9 in 29 1/3 innings for Minnesota this season after signing a one-year deal worth $4.75MM last winter. He saved 14 games in 15 chances but missed almost the entire second half with rotator cuff inflammation. Glen Perkins took over as closer in Capps' absence.

Minnesota originally acquired Capps from the Nationals for catcher Wilson Ramos at the 2010 trade deadline. He posted a 2.00 ERA in 27 innings down the stretch that year and following up with a 4.25 ERA in 65 2/3 innings last summer. Capps was a Modified Type-A free agent under the new collective bargaining agreement last offseason.

The Indians are focused on trade candidates who are under team control beyond 2012, ESPN.com’s Buster Olney reports (on Twitter). This means players such as Shane Victorino aren’t ideal targets for Cleveland. Here are more links from around MLB for Thursday afternoon…

Looking to bolster their pitching staff for the stretch drive, the Angels have interest in both Matt Capps and Francisco Liriano according to Jon Paul Morosi of FOX Sports (on Twitter). The Twins have made both players available, though Morosi says there is an outside chance a deal for either happens.

The Halos have continued to look for bullpen help even after acquiring Ernesto Frieri from the Padres, and their rotation took a hit when Dan Haren was placed on the DL with a back issue. The trio of Ervin Santana (5.75 ERA), Jerome Williams (4.67 ERA), and Garrett Richards (4.21 ERA) has been shaky behind Jered Weaver and C.J. Wilson. Los Angeles is also said to have interest in Zack Greinke.

Capps, 28, has pitched to a 3.42 ERA with 14 saves while battling shoulder inflammation this season. He is owed approximately $2.3MM for the rest of the year and has a $6MM club option ($250K buyout) in his contract. The 28-year-old Liriano owns a 4.93 ERA in 15 starts and five relief appearances. He struck out 15 last night and has pitched to a 2.83 ERA in nine starts since returning to the rotation. Liriano will become a free agent after the season and is owed roughly $2.75MM the rest of the way. 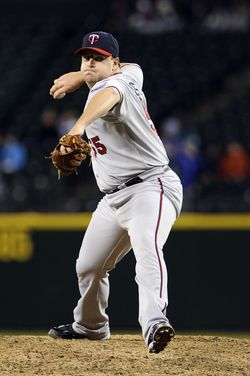