The Twins have signed Jamey Carroll to a two-year deal to be their everyday shortstop.  The team announced the deal today.  Carroll's contract will guarantee him $6.75MM and includes a $2MM mutual option for 2014. The option vests if Carroll makes 401 plate appearances in 2013, though he can choose to turn it down.  SI's Jon Heyman has further contract details. The Millenium Sports Management client drew interest from multiple teams this offseason before signing with the Twins, who are operating under interim GM Terry Ryan. 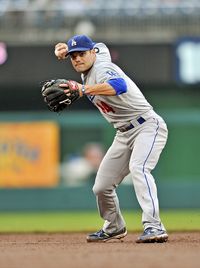 The 37-year-old infielder played shortstop and second base for the Dodgers in 2011, posting a .290/.359/.347 line in 510 plate appearances. He hasn't posted an on-base percentage below .355 in any of the past four seasons and he has a career mark of .356 after a decade in the Major Leagues. Carroll, who also has experience at third base and in the outfield, stole ten bases without getting caught this past season. He is not a ranked free agent and won't cost his new team a draft pick.

Carroll spoke with MLBTR's Tim Dierkes in June and you can check out the interview here.