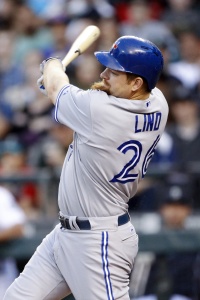 The Blue Jays exercised Lind’s $7.5MM option on Lind earlier today, and Lind’s contract also includes a 2016 option for $8MM or a $500K buyout. Even though the Jays picked up the option, there were rumors they might trade Lind. Lind hit .321/.381/.479 in 290 plate appearances this season, but the Jays’ acquisition of another lefty first baseman, Justin Smoak, last week was a possible indication that they were planning for Lind’s departure.

The Brewers had a need at first base, and Lind will presumably take most of the at-bats there. He’s below average defensively at any position, but he should be able to make up for that with his hitting. At age 31, there isn’t much reason to expect a steep decline from his .273/.336/.450 career numbers, although a repeat of his 2014 offensive performance is perhaps unlikely.

Lind is a career .212/.257/.331 hitter against lefties, so the Brewers will surely use him in a platoon, possibly with someone like Jason Rogers or with another outside addition. As Brewers GM Doug Melvin points out (via Todd Rosiak of the Journal Sentinel on Twitter), though, the NL Central is heavy on right-handed starting pitching. The main Brewers 2014 first basemen, lefty Lyle Overbay and righty Mark Reynolds, are both set to become free agents.

Estrada posted a 4.36 ERA with 7.6 K/9 and 2.6 BB/9 for the Brewers in 2014. He’s entering his last season of arbitration eligibility (in which he’s projected to make $4.7MM) before he can become a free agent. He lost his job in the Brewers’ rotation in July, then pitched significantly better down the stretch as a reliever. He’s a fly ball pitcher and he isn’t a hard thrower, which led to 29 home runs allowed last season. Still, his other peripherals are solid, particularly if he can revert to his 2013 numbers, when he posted 8.3 K/9 and 2.0 BB/9. The Blue Jays currently appear mostly set in their rotation, particularly after picking up J.A. Happ’s option last night, so Estrada could be ticketed for the bullpen.