October 6: According to Jon Heyman of MLB Network, Senzatela can increase his annual salary by meeting thresholds of innings pitched. By reaching 200 innings in 2022, he will add $1MM to his salary in each season from 2024 to 2027, and the same applies for 2023. That means Senzatela has the potential to add $8MM to his payout.

October 5: The Rockies announced this afternoon they’ve agreed to a five-year contract extension with right-hander Antonio Senzatela. He’ll be guaranteed $50.5MM, and the deal also contains a club option for the 2027 season. Senzatela, a client of Republik Sports, was headed into his second trip through the arbitration process and had previously been under club control through the 2023 season. 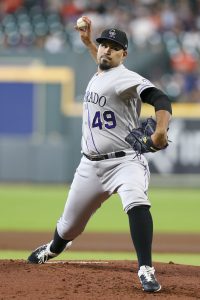 It’s a rather surprising first move for newly minted general manager Bill Schmidt, who shed the “interim” tag from his title over the weekend. Senzatela has, at times, looked the part of a durable innings eater with a grounder-heavy approach, but he also possesses one of Major League Baseball’s lowest strikeout rates and was only in line for a modest raise on this season’s $3MM salary in arbitration. He’ll now earn $7.25MM in both 2022 and 2023 before taking home $12MM annually from 2024-26. The 2027 option is valued at $14MM.

Senzatela, 26, has been a durable rotation cog for Colorado over the past few seasons, although it’s worth noting that as recently as 2019, he was optioned to Triple-A and finished the season with an ERA just shy of 7.00. The right-hander was hammered for a 10.34 ERA from July through September that season but has enjoyed much more success since returning.

Clearly, the Rockies are betting that he’ll be able to continue to suppress runs at a roughly average rate, leaning heavily on his blend of strong control and knack for inducing grounders. The challenge for Senzatela will lie partly in his ability to reduce the rate at which he allows hard contact. Of the 98 qualified pitchers in Major League Baseball this season, Senzatela’s 90.6 mph average opponents’ exit velocity was sixth-highest. That’s driven in part by a propensity to allow hard contact on the ground; his exit velocity on ground-balls is fourth-highest in MLB, whereas on balls in the air it’s a slightly less-alarming 27th.

Historically speaking, there’s ample precedent for pitchers in Senzatela’s service bracket — more than four years, less than five — signing a deal in this range. Kyle Hendricks’ 2019 extension with the Cubs, a five-year deal worth a guaranteed $55.5MM, is the most recent and closest parallel.

Notably, Hendricks also largely goes against today’s archetypical strikeout machine. He relies more on weak contact and pinpoint command to offset one of the game’s slowest fastballs, however, whereas Senzatela’s power sinker hovers in the 95 mph range but simply doesn’t miss many bats.

While both pitchers are grounder-heavy command artists, Hendricks had a vastly superior track record that included a prior third-place finish in NL Cy Young balloting. He’d already agreed to a $7.405MM salary for the forthcoming 2019 season, and Senzatela would’ve been hard-pressed to earn a second-time arbitration salary in that range. If Hendricks was indeed cited as a point of comparison in negotiations, it’s a strong deal for Senzatela’s camp to have come close to that same guarantee with a demonstrably worse statistical platform.

That said, while the price point may be a bit of a surprise, the Rockies surely place extra value on pitchers who’ve shown the ability — and the desire or willingness — to pitch effectively at Coors Field. Persuading any free-agent starting pitcher to sign on for multiple years pitching at altitude is a difficult endeavor. Beyond that, the Rockies have a fairly weak farm system, so trading for a controllable pitcher is easier said than done. Senzatela has had his share of success in recent seasons and, if he can continue on the same trajectory he showed from 2020-21, the deal will look reasonable enough.

From a payroll vantage point, the Rox can certainly afford the deal as structured. Colorado had just under $47MM in guaranteed salary on the 2022 books, and Senzatela’s salary bumps them to a bit more than $54MM. Charlie Blackmon will tack on another $21MM when he exercises a player option for the 2022 campaign, but even that subsequent $75-76MM is nowhere near the franchise-record $145MM payroll. Colorado is reported to be in agreement on an extension with first baseman C.J. Cron as well, but that shouldn’t drive up the bottom-line payroll in 2022 by too much.

Moreover, by the time Senzatela’s salary jumps to the $12MM range, the Blackmon contract will be off the books. The Rockies didn’t have a single guaranteed salary on the 2024 payroll prior to this long-term deal, though a $16MM club option on top pitcher German Marquez appears likely to be exercised, barring a significant injury or decline. An annual $12MM salary for an innings eater of Senzatela’s nature isn’t an egregious price to pay, although the downside with him is greater than with other arms who’ve signed in this price range — and it’s a bit surprising to see that price tag agreed upon so far in advance.

At the end of the day, the Senzatela extension serves as another reminder that the Rockies don’t view themselves nearly as far from contending as their 74-win season and -57 run differential would suggest. Colorado bucked conventional wisdom at the deadline when opting to hang onto Trevor Story, Jon Gray, Daniel Bard, Cron and other trade candidates, ultimately only moving Mychal Givens despite being buried in the division and lacking long-term control of those players.

Owner Dick Monfort has repeatedly stated in the past that he believes the current Rockies core is capable of contending, although that core will likely be turning over at least to an extent with the expected departure of Story. Competing in a division with the two best teams of 2021, plus a flawed-but-talented Padres squad in win-now mode would appear a daunting task for most teams, but the Rockies operate on an island and, in many ways, prefer their own unorthodox methodologies to more popular industry trends. The group of Marquez, Senzatela, Kyle Freeland, Gray (if he’s re-signed) and Austin Gomber certainly could form the nucleus of a competitive pitching staff, but the Rox are thin on depth behind that quintet and will need another year of uncanny health in the rotation just to repeat their 2021 output. Some additional roster augmentation will be needed this offseason.

Jeff Passan of ESPN was first to report the agreement and the deal’s terms.