The parallels between the Giants’ Joey Bart and the Orioles’ Adley Rutschman are plentiful. Both were standout catchers at reputable Division-I schools –Bart at Georgia Tech and Rutschman at Oregon State. Bart was in the running for the No. 1 overall pick in 2018 but went second overall to San Francisco. A year later, in 2019, Rutschman went No. 1 overall to Baltimore. Both draw significant praise for their defensive skills — each received a 60-grade on the 20-80 scale at both FanGraphs and MLB.com — as well as their raw power (again, both 60s). They’re widely considered to be the top two catching prospects in the game. 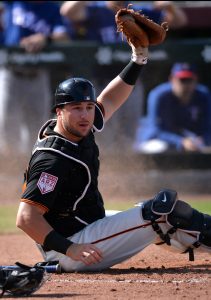 Behind the plate, Bart posted a rather pedestrian 27 percent caught-stealing rate across those two minor league levels before absolutely owning the run game in the AFL, where he caught nine of the 13 runners who attempted to take a base against him. Scouting reports praise his receiving and framing abilities as well as his ability to block pitches in the dirt — all things you’d expect for a catcher who was named ACC Defensive Player of the Year prior to being drafted in 2018. With Buster Posey’s contract winding down and his production waning, it’s not out of the question to think that Bart could debut in 2020 if the season is able to get underway at some point. If not, a 2021 debut should be considered likely, barring some major injury.

The 22-year-old Rutschman, meanwhile, is obviously further from the Majors but offers many of the same skills. He’s touted as a high-end defensive catcher with a strong arm behind the plate and plenty of pop with the bat. Rutschman hit .254/.351/.423 with a hearty 13 percent walk rate through 154 plate appearances in his pro debut, topping out with Class-A Delmarva. He struck out in just 17.5 percent of those plate appearances, although it’s worth pointing out that he really hasn’t faced any pitching that’s older and more experienced than he is just yet. 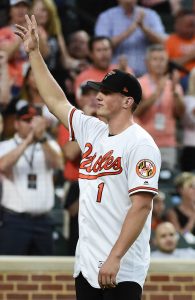 Unlike Bart, Rutschman is a switch-hitter. He has power from both sides of the dish even if most reports agree that his left-handed swing is superior to his right-handed swing. He threw out seven of the 11 hitters who tried to steal against him in his limited pro debut and, by all accounts, should be adept at controlling runners, calling a game, blocking pitches in the dirt and framing. It’s reasonable to expect that he’ll be in the Majors by 2022 — and a 2021 debut isn’t all that far-fetched (depending on any service time games the Orioles do or don’t feel like playing).

Given that Bart and Rutschman were elite college catchers who went within the first two picks of a draft class in consecutive seasons, this likely isn’t the only place you’ll see the two of them compared in the coming years. Rutschman is generally ranked more highly on prospect lists, although not by much in some cases. He’s No. 4 to Bart’s 14 at MLB.com and No. 5 against Bart’s 10 at FanGraphs. Other publications have a bit more distance between them, including Baseball America (Rutschman at 5, Bart at 32), Baseball Prospectus (Rutschman at 4, Bart at 25) and The Athletic (Rutschman at 10, Bart at 44). Prospect rankings are in a constant state of flux, though, and the pair is close enough that the consensus opinion could easily change in a few months’ time.

It’s clear that both are expected to become high-end catchers with All-Star potential, but let’s open up the debate (link to poll for Trade Rumors mobile app users)…

8:40pm: The Giants further announced that Bart has been diagnosed with a non-displaced fracture that will not require surgery. He’s expected to be recovered within four to six weeks. That’ll put an end to his AFL run but should allow him a mostly normal offseason.

There’s no indication that the injury will impact Bart’s readiness for the 2020 season. He’s meeting with a specialist today, per the team’s announcement. But the broken thumb certainly figures to put an end to bring an early end to Bart’s 2019 Fall League stint and comes on the heels of a season that was shortened by a fracture in his other hand. Bart sustained a broken left hand back in April and missed nearly two months as a result of the injury. Both fractures were sustained when he was hit by a pitch.

The two hand fractures notwithstanding, the 2019 campaign has to be considered a success for Bart, whom the Giants selected with the No. 2 overall pick in the 2018 draft. The former Georgia Tech star reached Double-A as a 22-year-old, closing out the season with 22 games at that level and hitting .316/.368/.544. In a combined 338 plate appearances between Class-A Advanced and Double-A — both pitcher-friendly settings — Bart slashed .278/.328/.495 with 16 homers, 14 doubles and three triples.

Bart ranks prominently on most top prospect lists at this point, sitting 19th on MLB.com’s midseason update, 15th on Baseball America’s Oct. 1 update and 17th on Fangraphs’ latest rankings. A promotion late in the 2020 season doesn’t seem out of the question, though this season’s injuries have perhaps slowed his trajectory a bit. A 2021 arrival at the MLB level might be a safer bet. That would mark the final season of franchise icon Buster Posey’s nine-year, $167MM contract and present Bart with ample opportunity to learn from one of the best backstops in recent memory.

While there have obviously been some bright spots for the Mets this year, Joel Sherman of the New York Post rejects the idea that it’s just another season. Having dealt away significant prospects and bypassed opportunities to recoup others, the Mets made a win-now gambit that hasn’t paid out. That makes this year a distinct waste, Sherman argues. There’ll surely be long-term impacts that haven’t yet fully been felt. Most immediately, Sherman posits that skipper Mickey Callaway is likely to be bounced from the dugout — an approach that would be supported heartily by MLBTR readers.

Giants leadership will consider some alterations to the dimensions of their spacious home park, Andrew Baggarly and Eno Sarris of The Athletic report in an exhaustive look at the matter (subscription required). Members of the ownership group posed the question of whether the right-field fences should be moved in and whether the bullpens should be moved to new president of baseball ops Farhan Zaidi in Spring Training; the first-year baseball ops leader agreed that it was at least worth exploring. Manager Bruce Bochy suggested to Baggarly that “Triples Alley” in right field would make an ideal spot for the bullpens to be relocated. “Personally, I feel if you hit a ball 400 feet, it should be a home run,” said the skipper. “So yeah, I think we should all be open minded to making a change.” Zaidi, meanwhile, stressed that the discussion is in its nascent stages. While he’s appreciative of the manner in which park-specific idiosyncrasies can impact roster construction, Zaidi also spoke of not “becoming so idiosyncratic that you become an outlier” that proves disadvantageous. Baggarly and Sarris explore just how much of an outlier the newly renamed stadium has become and also interview several players about the park’s dimensions.

More out of San Francisco…

The latest from San Francisco…

JUNE 17: Bart’s signing is now official, per an announcement from the Giants. He signed for $7.025MM, the largest upfront bonus given to a position player in the history of the draft, Callis tweets.

JUNE 13: The Giants are closing in on a deal with No. 2 overall pick Joey Bart, reports John Shea of the San Francisco Chronicle. The former Georgia Tech catcher needs only to pass a physical, per the report, before the deal is official. An announcement from the team could come as soon as Friday, according to Shea, who adds that Bart is expected to sign for a bit south of the $7.494MM value of the No. 2 overall slot.

Bart, 21, obliterated college opposition this season, hitting .359/.471/.632 with 16 homers and a dozen doubles in 220 at-bats. While he has a fair bit of swing-and-miss in his game at present (56 strikeouts), he also drew 41 walks in that time and was hit by another eight pitches, contributing to his robust OBP.

It seemed fairly certain for much of the spring that Bart would go in the top few picks, and in the weeks leading up to the draft, virtually every mock draft from major outlets pegged Bart within the top three (most frequently going to the Giants). Kiley McDaniel and Eric Longenhagen of Fangraphs rated Bart as the third-best prospect in the class, while the Baseball America staff pegged him fifth, Jim Callis and Jonathan Mayo of MLB.com ranked him sixth, and ESPN’s Keith Law slotted him in as the draft’s 10th-best talent.

Bart’s arm draws rating of 60 to 70 on the 20-80 scale, and he draws frequent praise for his hands, footwork and athleticism behind the dish. He’s expected to stay behind the plate and hit for plenty of power as a regular catcher down the line, though his strikeout tendencies might suppress his average. That said, an above-average defensive catcher who can get on base and hit for power is a rare commodity in Major League Baseball, and if Bart realizes that potential in a few years, he’ll more than justify his selection near the top of the draft.

Shea notes that San Francisco GM Bobby Evans scouted Bart in person on multiple occasions and effused praise for Bart both as a player and a leader. “Joey just has this drive to be the best,” said Evans. “He’s a leader on his team, somebody guys look to on both sides of the ball, offensively and defensively. You love to see a guy love his craft the way Joey loves being behind the plate.”