The Mets have announced their deal with righty Anthony Swarzak, as Marc Carig of Newsday first reported (via Twitter). It’ll be a two-year, $14MM contract for the Jet Sports Management client, according to Carig. Swarzak will take home a $1MM signing bonus and then salaries of $5MM and $8MM, per Jon Heyman of Fan Rag (via Twitter). 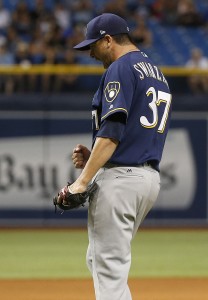 Swarzak, 32, will bolster the late-inning mix for the Mets, who had stated all winter long that the bullpen was a priority. He was the option chosen after New York failed to land a few other targets, Carig notes.

That was a notable breakout for a reliever that had only once previously allowed less than four earned runs per nine over a full MLB campaign. The eight-year veteran owns a lifetime 4.22 ERA in 561 1/3 career frames.

While it’s easy to raise an eyebrow at the idea that Swarzak can sustain the improvement, there was more to it than sample fortune. The veteran clearly found something, as he turned in a personal-best 95.0 mph average fastball and a 14.0% swinging-strike rate that dwarfed anything he had shown previously. The velo boost was also evident in Swarzak’s slider, which was quite a different pitch than it was in most of his prior work. He was equally effective against lefties and righties in his sparkling campaign, MLB.com’s Anthony DiComo notes on Twitter.

For the Mets, the move gives new skipper Mickey Callaway one more arm to call upon when the game is on the line. Deepening the relief corps as much as the organization hopes may still require further acquisitions, though perhaps not at this contractual magnitude. Since the club was chasing some higher-priced pieces that have since signed elsewhere, it’s also possible that there could be some extra cash available for further relief moves or to address other needs.