SEPTEMBER 19: As expected, Kopech has undergone the procedure. He’s not expected back until the start of camp in 2020, per the club.

SEPTEMBER 7: White Sox righty Michael Kopech has been diagnosed with a torn ulnar collateral ligament, the team announced to reporters. Tommy John surgery has been recommended for the highly regarded young hurler. 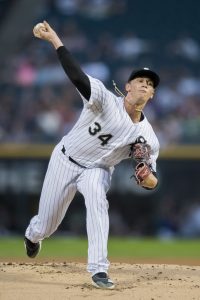 This news represents a major blow to a rebuilding organization that had hoped to build momentum entering the 2019 campaign. Kopech, 22, had only just arrived in the majors — bringing the promise of an exciting end to a largely forgettable 2018 campaign.

While the long-term hope will remain that Kopech can become a front-of-the-rotation anchor, it’ll have to wait until 2020. Odds are, he’ll be sidelined for all of the 2019 campaign while recovering. The silver lining for the young hurler — and the twist of the dagger for the organization — is that he’ll accrue MLB service time all the while.

Kopech entered the season as one of the game’s brightest pitching prospects, and largely delivered on the hype in his first full season at Triple-A. He turned in 126 1/3 innings of 3.70 ERA ball, with 12.1 K/9 and 4.3 BB/9, before receiving his first call-up to the majors.

Upon his promotion, Kopech turned in three eye-opening outings in the majors to close out the month of August. Though he was limited to just 11 total frames owing to the whims of Mother Nature, the youngster allowed just a single earned run while racking up nine strikeouts against one walk.

Unfortunately, the flamethrower exhibited a velocity decline in his most recent outing, an 82-pitch dud in which he allowed seven earned runs on nine hits (including four long balls) in just 3 1/3 innings. It seems that something wasn’t quite right, clearly, as the organization ordered testing that identified the newly revealed injury.

To this point, the South Siders’ efforts to build a new core have run into the realities of exposing young players to the majors. There’s still plenty of promise, but the aggregate output is a 56-84 record. And strides for some players have occurred alongside struggles for others — especially in the rotation.

When the Sox traded away Chris Sale and Adam Eaton in the 2016-17 offseason, kicking the club’s rebuild into top gear, the result was a farm system that many considered one of the best in the sport. In addition to delivering top position playing prospect Yoan Moncada, that pair of swaps delivered a haul of new pitching talent.

There has been promise along the way for the hurlers, with Kopech shining as one of the brighter lights. Prospect Dane Dunning has as well, though he has been on ice since late June owing to a balky elbow. Those pitchers that have already spent significant time in the majors, though, haven’t yet delivered on their promise.

True, southpaw Carlos Rodon has put together nearly a hundred frames of 2.89 ERA ball this year after returning from his own injury problems. But even that effort has come with questions, as Rodon’s breakout in the results department has come in spite of peripheral declines. A similar early showing from Reynaldo Lopez has now corrected over the course of the full season. Other young pitchers — Lucas Giolito, Dylan Covey, Carson Fulmer — have continued to run into troubles in the majors.

At this point, the outlook of the 2019 rotation is at best uncertain. Without Kopech, the unit appears decidedly less exciting. Exactly how that’ll impact the team’s offseason plans remains to be seen, but there’s obviously potentially another hole to be filled. Of course, there’s also less cause for the organization to believe it can move into a truly competitive stance.