The Angels have signed ace Jered Weaver to a five-year, $85MM contract extension, according to Jon Heyman of SI.com (via Twitter). The deal includes a full no-trade clause, according to Tim Brown of Yahoo! Sports (via Twitter), and various "significant" bonuses for winning the Cy Young and MVP awards and for earning All-Star berths, writes Scott Miller of CBSSports.com. 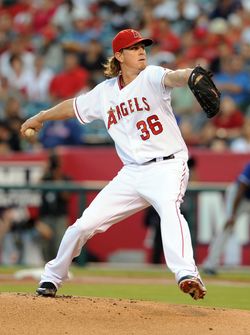 Weaver, a Boras Corporation client, as MLBTR's Agency Database shows, was slated to hit free agency after 2012, so this extension buys out his final year of arbitration eligibility and four years of free agency at an average annual salary of $17.5MM. He earns $7.37MM in 2011 after losing an arbitration hearing with the Halos prior to this season. Tim Dierkes explained in May that Weaver could have earned as much as $15MM in 2012 after another round of arbitration.

Weaver's deal is similar in terms to the ones Felix Hernandez signed with the Mariners (five years, $78MM) and Justin Verlander (five years, $80MM) inked with the Tigers prior to the 2010 season, as noted by Heyman (Twitter). The difference, though, is that both Hernandez and Verlander had two remaining years of arbitration eligibility when they signed, whereas Weaver is nearer to free agency with only one remaining. The contract is the largest for a pitcher in Angels history, according to Bill Shaikin of the Los Angeles Times (via Twitter).

As Jeff Passan of Yahoo! notes, the projected class of free-agent starters in 2013 is deep, headlined by Cole Hamels, Zack Greinke, Matt Cain, Shaun Marcum, John Danks, Anibal Sanchez and Francisco Liriano (Twitter link). So, perhaps Weaver and his representatives were motivated to get a jump on that market, as Boras Corporation clients typically go to free agency. Buster Olney of ESPN.com thinks Weaver could have fetched a nine-figure contract on the open market after 2012 (Twitter link).

The deal will be announced by the club on Tuesday.