MLBTR continues a series where we interview top baseball executives about their college years. We’ll ask about why those chose their school, memorable moments, their favorite professor, important connections made, college learnings they still use today, and more.

We’ve already spoken to Reds GM Dick Williams, and next up in our question-and-answer series is Chicago Cubs Executive Vice President and General Manager Jed Hoyer – a graduate of Wesleyan University (Middletown, CT).

Hi Jed, thanks for taking the time to speak with MLBTR. You have a little different path than some others, as you were an athlete, pitcher AND pitching coach at Wesleyan University. What led you to Wesleyan?

“The over-arching goal of my college search was to combine three factors – great academics, the ability to continue playing baseball, and a campus environment that would broaden my limited horizons. I looked at a lot of different schools and the best combination of those factors was Wesleyan. In hindsight, I was less intense and strategic about that decision than I would have been later in life. I simply had a great feel for the school, loved my interactions with the baseball coach (Pete Kostacopoulos), and could picture myself on campus. I had a wonderful four years at Wesleyan and will always be thankful that my instincts were right.” 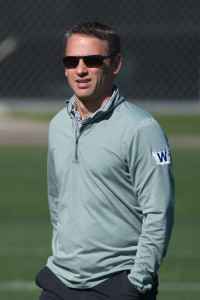 When you look back at your Wesleyan days, what special moments can you share?

“My favorite moments from Wesleyan come from our baseball team my sophomore year. We advanced to the (Division III) College World Series and ended up losing in the national title game to Jarrod Washburn (Wisconsin-Oshkosh). Despite the disappointment of losing at the end, it was an incredible experience. We were already a close-knit group, but the intensity of the postseason that year only brought us all closer.”

I’m going to get to some student-athlete questions, starting with the academic side. But first, can you tell me about your immediate post-graduate career? I know you initially stayed in school, so to speak.

“My first job after college, I worked as an assistant director of admissions at Kenyon College (Gambier, OH). I also was an assistant baseball coach. I left Kenyon after a year and returned to Wesleyan in a similar capacity. I was really fortunate that my bosses at both schools allowed me the time away from the office to coach. At the time, I simply did it because I wanted to stay on the field. In hindsight, it was an invaluable experience for me to learn about the game from a different angle. I had never thought about how to teach fundamentals or how to motivate players prior to coaching. The three years I spent coaching has benefited me in ways I never would have imagined at the time.”

What was your college major?

I didn’t know that! Have you been able to apply your major to baseball?

“I loved being a history major. I loved the professors I had. I really enjoyed the reading material. Even today, if I get a chance to sit down and read a book, I’m going to grab a biography or something about a historical period. But I will say if I knew I’d be where I’m sitting right now, I certainly would have angled myself more towards economics or something more quantitative.  I do think that’s important when you start your life after college to know that every move you make doesn’t have to be planned so specifically. I was kind of referencing that before in regards to coaching. I coached baseball because I loved being out there, and I wanted to stay involved with the game. It gave me an awesome perspective on the game that I never had. I worked for a couple consulting firms later on, and that really helped me learn how to build business models and advanced my quantitative skills. I think every job I’ve had has provided me with different skills or knowledge that I can use every day in baseball.”

You might have a different perspective on this question as a former admissions official and former coach. What advice do you give high school and college students who want to work in a front office someday?

“I always tell aspiring baseball people the same thing – get involved in baseball in every way you possibly can. For me, it was playing until I wasn’t good enough to play anymore and then coaching. Baseball was my athletic love, and now I’m fortunate enough to be able to come to work every day and apply that. Ultimately, when I come into work, my entire day is spent dealing with baseball in various forms – whether it’s contractual, whether it’s rules, whether it’s player evaluation. Sports science … analytic stuff … whatever it might be, it’s all baseball all day. If you don’t absolutely love baseball, this is never going to work for you.”

Were there lessons you learned at Wesleyan that you utilize today as part of this day-to-day routine?

“I think the two things that come to mind right away are – No. 1, there’s nothing better than team sports. The camaraderie that’s built among a group of people fighting for a common goal is really something special. I know I experienced that playing in college. I don’t think that’s any different when you’re getting paid to play in the big leagues. Creating a great culture in the clubhouse, getting everyone pulling in the same direction, there’s no doubt that the teams that do that best have a big advantage. The second thing, on a more academic level, is that lifelong learning is something that’s exceptionally important. The most impressive thing about Wesleyan to me was that there was this eclectic group of intellectually curious 19-22 year olds– and those were the type of people I wanted to be around on a day-to-day basis. The school was filled with people that are constantly learning, always curious, and consistently pushing the boundaries. Those are the type of people I wanted to be surrounded by when I was 20 and they are the same people I want to fill our front office with at 42.”

As you reflect back on Wesleyan and being a student there, did you have a favorite professor?

“The most vivid memory of the classroom at Wesleyan – and I think back on this quite a bit – there was a professor named Richard Slotkin, and he taught American Literature. His classes were incredibly hard to get into because he was such an amazing lecturer. I remember sitting in his lectures and thinking … I hope someday I can be as good at my job and as passionate about my job and as knowledgeable about the field of study as this guy is. Candidly, I think I’m still trying to get there. I think it’s great when you see anyone in any walk of life that so dominates their field – and you can tell that it brings them so much joy to share it.”

Baseball-wise, did you make any important connections at Wesleyan that helped you in your baseball career?

“Ben Cherington played at Amherst, and they were our rival. My closest friend from high school played at Amherst with Ben, so I got to know those guys very well. It was a really fun and great rivalry. When I tried to get an internship with the Red Sox a few years later, the connection with Ben really helped me. Ben is an incredible talent.  I was really fortunate to get to know him at age 19 in a setting that neither of us ever would have imagined would have led to a professional relationship and friendship.”

You set Wesleyan’s all-time school saves record – and were also the everyday shortstop. Can you talk about your playing days?

“If I had any strength in baseball at all, it was that I was really versatile. My sophomore year, I played left field and was the closer. My junior year, I played shortstop, was a starting pitcher, and even played catcher a few games when our catcher got hurt. My senior year, I played shortstop and was the closer. In general, I felt comfortable moving around the diamond. I knew I wasn’t going to play in the big leagues.  I was self-aware enough to realize that.  I played in the Cape Cod League after my junior year and was teammates with Mark DeRosa, John McDonald and Dan Reichert. It was a great experience and also a humbling experience. I realized that if I was going to have a future in baseball, it wasn’t going to be playing on TV.”

Do you ever get a chance to go back to visit campus?

“I’m actually going back soon. My 20th reunion is in the middle of May, so I’m going back for that – which will be fun. When I was with the Red Sox, I went back often; it was only a three-hour drive. I could get down there for a game or to visit people. But after I left the Red Sox, I haven’t been back since. I’m excited to be back on campus.”

Final question, as we tie together your college major and your professional career. Did obtaining a history degree pique your interest in learning more about the histories of the Red Sox and the Cubs?

“No doubt. I’ve been fortunate that two of the three teams I’ve worked for have incredibly rich, deep histories. Those two teams are more than just baseball teams to their cultures … they’re a way of life that’s passed down generation to generation. I think I’d be doing a disservice to the job if I didn’t completely embrace the history of the Red Sox or the Cubs. There are so many similarities between the two teams.  The Red Sox ended their long suffering.  Now we get the incredible opportunity to try to do the same thing in Chicago.”