MLBTR is beginning a series where we interview top baseball executives about their college years. We’ll ask about why those chose their school, memorable moments, their favorite professor, important connections made, college learnings they still use today, etc.

Leading off the question-and-answer series is Cincinnati Reds Senior Vice President/General Manager Dick Williams – a graduate of the University of Virginia.

First off, sorry about the basketball game Sunday. Why did you choose Virginia? 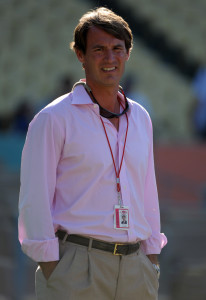 “I’m still reeling from the loss. Feel free to put that in the article. It was tough. I was so bummed. It’s been a while since we’ve gone to the Final Four. Why Virginia? It’s tough to pinpoint exactly. I went to boarding school in the northeast and I loved it. After two years in the northeast, I thought I would try a different part of the country. I’ve always been a bit of a wandering soul, and I wanted to try something new. So I applied to some northeastern schools, but I also applied to schools in the southeast and on the West Coast. I kind of had it in my mind that I was going to try a new part of the country.

The real tipping point was that I was a finalist for an award called the Jefferson Scholar, and they award a handful of these each year to incoming freshman. It’s a prestigious academic leadership award. They invite the finalists down their senior year to participate in a multi-day forum. They interview you and they have you participate in activities … and take tests … and they observe you. Then they award the scholarships for the next year. I didn’t get picked as a Jefferson Scholar, but I got to go down there for three days in March of my senior year in high school. And I spent three days on the Charlottesville campus – which was more than I spent on any other college visit. I think I just got more familiar with it. It didn’t hurt that it was St. Patty’s Day while I was there, so they had all these fraternity parties and all of the social activity going on. This beautiful campus … it was spring … it was gorgeous … and we’re just running around having the time of our lives. I really got a good feel from being there. I think that just gave it a leg up over other great schools that I was looking at. I think going there for that long weekend made all the difference.”

Although you weren’t selected a Jefferson Scholar, you did decide to go to UVA. Did you end up going there on an academic scholarship?

“They have another program called the Echols Scholars, and that’s for the top incoming freshmen academically. It is not a monetary scholarship. What it allows you to do is it gives you academic freedom when you get there. And I was an Echols Scholar. It gives you priority to sign up for any classes. Instead of classes based on age or what your major was, if you were an Echols Scholar, you got a free pass into any class you wanted to take. That really shaped my experience there, because I made it a point of trying to take classes in every discipline. I took a class from the engineering school. I took classes from the nursing school. I took classes from the architecture school. I did a little bit of everything – just because I was given that freedom. You didn’t have to meet typical major requirements as an Echols Scholar. You could build your own field of study. So you could really spread it around, and I took full advantage of it. I just took a lot of things that interested me that I would never get a chance to study again. When I look back on my transcript, it wasn’t all finance or all politics. It really was a melting pot of things I was interested in.”

So, what was your major?

“Well, my diploma says Echols Scholar Interdisciplinary Studies. So I had to explain that in job interviews for years. Just telling people that I really didn’t have a major. But I majored in being a liberal arts student – taking a little bit of everything.”

Looking back, should you have focused on a specific major – or are you comfortable with the route you took?

“I’m really comfortable with the route I went. I loved doing it the way I did. And when I got out of college, I went right into investment banking on Wall Street – and they put us through a training program of accounting and finance. I had a very good base in that. I learned plenty there and on the job. I ended up getting my chartered financial analyst designation – my CFA – a few years later, and that was self-study. Once my career took me on a path, then I began to do a lot of that follow-up work on my own.”

Did you have a favorite class or favorite professor?

“I would have to say my favorite class was what they called ‘Bice Psych.’ Professor Bice. Everybody took that. It was Intro to Psychology. Every class was like a Broadway show. He always brought something very interesting to class. A lot of practical examples. A lot of funny stories. A lot of interactive exhibits. It also didn’t hurt that it was a pretty easy ‘A’ … For me, you got out of high school and you get to college – and you don’t know what to expect. I received some good advice to sign up for this class. It reminded you that academics could be fun and interesting. Not every class was big textbooks that you can’t read and worrying about copying down notes. ‘Bice Psych’ was like going to recess.”

Can you share any memorable moments from your college days?

“I went abroad for a semester. I went to Australia; that was one of my formative experiences. I had a great time going down there. It’s kind of different being on the other side of the world. It was more about the travel and being able to travel around Australia and New Zealand. I kind of cheated a little bit … I went abroad, but there was no language barrier. That made it easier to meet people.”

Any college learnings that you utilize today?

Keep reading after the break for more …

Did you follow the college baseball team when you were there?

“Not a lot. When I was there, the college football team was ranked No. 1 in the country. People who follow UVA football know that doesn’t come along very often. My sophomore year (1990), we were the No. 1-ranked team in the country. I still remember the game vividly. We lost a shootout to Georgia Tech at home 41-38. Georgia Tech went on to become co-national champs that year. We lost that game, and what I also remember about it was that the Allman Brothers played UVA that night at University Hall. The campus was in mourning, so nobody went to the concert. I had these buddies come in from out of town. It was one of the great concert experiences of my life, because we were watching an Allman Brothers concert – and there were about 100 people there. We were able to walk right up to the edge of the stage. We could go anywhere we wanted. It was like having a private Allman Brothers show … I’m sure it was one of the hardest shows they ever had to play. There weren’t many people there to get them fired up. But my memory of it was that it was a pretty great show.

I don’t remember the college baseball team that well. I had a couple buddies who played. I don’t remember watching them very much. But the program has certainly ascended to a whole other level. They have an unbelievable new facility. I’ve been back there a couple times and I’ve been able to see the facility they have. And the team now is just a rocket ship. They’ve had several good years there. They’re a lot of fun to watch. We actually had a first rounder a couple years ago from UVA (RHP Nick Howard in 2014). I promise I didn’t have any undue influence on our scouting director. That was all him, but it was kind of neat to have a pick from my alma mater.”

Do you know Virginia coach Brian O’Connor a little bit?

“Not very well. I’ve met him once. I don’t get real involved in our amateur scouting, so I don’t get down to Charlottesville much. But I’d like to get to know him better.”

Obviously, you do get back to Virginia from time to time. As an alum, what emotions were going through your head while watching the Cavaliers play against Syracuse on Sunday?

“I was so disappointed. I know how many people were planning to watch them play in the Final Four. They’re such an easy team to root for, and I’m not just saying that as a UVA grad. They’re likable guys with a likable coach. Hard-nosed defense. This year, their offense kind of exploded. For three quarters of (Sunday’s) game, it was all UVA. Then that (Syracuse) run the last 8-to-10 minutes took all the wind out of our sails. It was just a bummer. But they’ll be back.”

Were you wearing your Ralph Sampson jersey during the game?

“Well, my era was Bryant Stith. So I had my Bryant Stith jersey handy. Ralph was a little before my time.”

What advice would you give to high school and college students looking to work in a major league front office down the road?

“If you’re serious about it, it’s never too early to start and there’s no job too small. Everybody now has pretty good academic credentials. It just gives you a leg up if you can show some practical experience around the sport. I’ve got one guy on my staff that started on the grounds crew. I’ve got one guy who started as a clubhouse attendant. I know guys who have worn a mascot costume. I know some guys who worked in media relations. At a young age, no job is too small to be around the game and get familiarity with it. But you have to have some patience. There aren’t that many job openings. You have to start early and have patience.”

Any important connections that you made in college that still play a part in what you do today?

“That’s a tough one. One of the other GM’s went to the same grade school I did in Cincinnati –Mike Hill of the Marlins. So I have that connection from grade school. For college, not sure I have a good one for that question. All of my UVA buddies were too smart to get into baseball. They all went and got real jobs.”

Any memorable stories from your college days that you can share?

“A couple come to mind. I used to go to a bar called Trax every Tuesday night and pay a $5 cover to see Dave Matthews and Boyd Tinsley before they made it big. I also had the opportunity to eat dinner in the rotunda one year.  Any time you got to do something in one of the historical buildings on campus, it was pretty special.”