The Rays have begun to bolster their bullpen, announcing on Thursday that they’ve acquired lefty reliever Dan Jennings from the White Sox in exchange for first base prospect Casey Gillaspie. To make room on the 40-man roster, the Rays designated right-hander Diego Moreno for assignment. 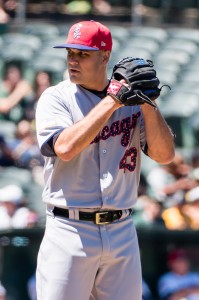 Tampa Bay has been known to be interested in picking up a left-handed reliever, and they’ve reportedly checked in on the likes of San Diego’s Brad Hand and Detroit’s Justin Wilson in recent weeks. Both relievers are reportedly attached to exorbitant asking prices, however, which likely prompted the Rays to shift to another southpaw that they can control beyond the current campaign. Notably, MLB.com’s Mark Feinsand tweets that the Rays are still looking at bigger names on the relief market, so there could yet be further additions to the Tampa Bay bullpen.

Jennings, 30, has been a solid bullpen piece for the Sox since being acquired prior to the 2015 season in a shrewd trade by Chicago GM Rick Hahn. (The Sox sent righty Andre Rienzo to Miami in exchange for Jennings.) Jennings has totaled 161 1/3 innings out of the South Siders’ bullpen in the past three seasons, and while his 7.3 K/9 and 4.0 BB/9 marks don’t stand out, he’s used a 59.1 percent ground-ball rate and a paltry 23.7 percent hard-contact rate to help him to a 3.12 ERA in that time.

While he’s long been effective against lefties, Jennings has been flat-out lethal against southpaw swingers in 2017, limiting them to a feeble .164/.286/.211 batting line through 85 plate appearances. He’s also earning just $1.4MM in 2017 and can be retained for another two years via arbitration, making him a nice longer-term piece for the Rays’ bullpen.

Jennings becomes the second reliever that the White Sox have flipped in a one-for-one swap involving a solid offensive prospect in as many days. (Anthony Swarzak officially went to the Brewers in exchange for outfielder Ryan Cordell yesterday.) Gillaspie, 24, was the Rays’ first-round pick in the 2014 draft and entered the season ranked as the game’s No. 74 overall prospect in the eyes of Baseball America. That ranking came on the heels of a strong .286/.387/.482 batting line in 555 plate appearances between Double-A and Triple-A in last year’s age-23 campaign.

The 2017 season has been a struggle for Gillaspie, however. He’s slumped to a .227/.296/.357 slash through his first 395 PAs with Triple-A Durham and had slipped from fifth to tenth on MLB.com’s rankings of the organization’s top 30 prospects. That said, MLB.com’s Jim Callis and Jonathan Mayo still placed a solid 50 grade (on the 20-80 scouting scale) on Gillaspie’s overall potential moving forward, praising the switch-hitter’s “untapped power potential” and touting him as at least a league-average defender at first base.

CSN Chicago’s Chuck Garfien tweets that Gillaspie, the younger brother of former White Sox third baseman Conor Gillaspie, is currently dealing with a broken toe and is expected to be out for another one to two weeks. He’ll then report to Triple-A Charlotte.

Losing his roster spot as a result of the trade will be the 30-year-old Moreno, who has tossed 5 2/3 frames out of the Rays’ bullpen this season and allowed three earned runs on six hits and a walk with six strikeouts. Moreno’s biggest claim to fame is being one of the two players traded by the Pirates to the Yankees in the 2012 swap that sent A.J. Burnett to Pittsburgh. He has just 16 innings at the big league level but has posted a more palatable 3.70 ERA with 8.3 K/9 against 2.8 BB/9 through 165 1/3 career innings in Triple-A.

ESPN’s Jerry Crasnick first reported that the Rays were closing in on a trade for a left-handed reliever (Twitter link). Marc Topkin of the Tampa Bay Times reported the specifics (also on Twitter).