Two-time All-Star Todd Frazier is set to announce his retirement today, he tells Greg Joyce of the New York Post. “(Baseball) has been my love my whole life,” the third baseman said. “It’s very hard to let go. Don’t get me wrong, it’s one of the toughest decisions I’ve ever made in my life. But where I’m at in my career and where I’m at in my life, I think it was the right decision. I think it’s time to be that family figure that I’ve always wanted to be.”

Frazier has appeared in the majors in each of the past 11 seasons. A supplemental first-round pick out of Rutgers by the Reds in 2007, Frazier emerged as one of the sport’s most promising prospects within his first couple pro seasons. He debuted in the big leagues in 2011 and cemented himself at the hot corner in Cincinnati not long thereafter. 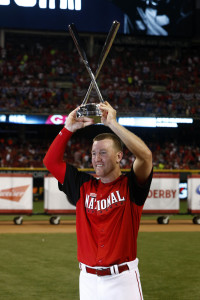 In 128 games in 2012, Frazier hit a productive .273/.331/.498 en route to a third-place finish in NL Rookie of the Year balloting. After a roughly league average showing the following season, he broke through as one of the better position players in the game. Frazier combined for a .264/.322/.479 showing between 2014-15, averaging 32 home runs per season. He was selected to the Midsummer Classic in both years and won the 2015 Home Run Derby in front of a home crowd in Cincinnati.

The rebuilding Reds moved Frazier to the White Sox as part of a three-team deal with the Dodgers the following winter. He spent a season and a half in Chicago, not quite reaching his peak Cincinnati level but still offering solid production. The Sox moved him to the Yankees midseason in 2017, and he spent the following two years in Queens after signing with the Mets that offseason. Frazier continued to hit at a decent level throughout that run. His batting average and on-base percentage gradually ticked down, but he popped 39 homers during his first two seasons as a Met.

Frazier’s 499 plate appearances in 2019 proved his last extended MLB workload. He signed with the Rangers over the 2019-20 offseason, then ended up back in Flushing when the Mets acquired him at the trade deadline. Frazier struggled down the stretch, though, and New York bought him out that winter. He hooked on with the Pirates last offseason and played in 13 games before being released in March.

That marked an end to Frazier’s time in the big leagues, but it didn’t bring his playing career to a complete conclusion. He was among a handful of respected veterans to represent the U.S. as part of last summer’s Silver Medal-winning team at the Tokyo Olympics.

Frazier wraps up his career with a .241/.318/.445 slash line in a bit under 5,000 MLB plate appearances. That production was seven percentage points better than league average in aggregate, by measure of wRC+, and he had three seasons with a wRC+ north of 115. A well-regarded defender for the bulk of his career, Frazier got plus marks from both Defensive Runs Saved and Ultimate Zone Rating. He suited up for six different clubs, combining to hit 218 homers and drive in 640 runs. Each of Baseball Reference and FanGraphs valued his career at around 23-24 wins above replacement, a very fine showing that endeared him to Reds fans in particular. MLBTR congratulates Frazier on an excellent run and wishes him all the best in his post-playing days.