Chipper Jones' 19th season in the Major Leagues will also be the final one of his career. The Braves announced that their 39-year-old third baseman will retire following the 2012 campaign. 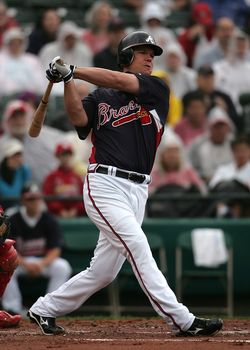 Larry Wayne 'Chipper' Jones has been a fixture in the Braves' organization ever since then-GM Bobby Cox selected him first overall in the 1990 draft. He leads all active players in service with one club, and it sounds as though he'll remain involved with the Braves after he stops playing. The Braves and Jones have expressed mutual interest in continuing to work together in future years.

Jones' contract included a 2013 club option for $7MM that would have become guaranteed at $9MM if Jones had played 123 games in 2012. The BB Abbott client earned upwards of $155MM as a Major Leaguer, according to Baseball-Reference.