7:02pm: The Angels will actually save approximately $20MM in total on the deal, Jeff Fletcher of the Orange County Register reports. Texas will pick up about $6MM of the tab, with the remainder of the savings coming from Hamilton sacrificing salary, per the report.

The $20MM is spread unevenly over the three years covered by the contract, per Fletcher. He adds that the deal “likely” has language providing that the Angels would recoup additional money if Hamilton loses pay due to suspension.

After starting the season about $12.5MM under the luxury cap for the current year, the Halos now have closer to $20MM in space, per MLB.com’s Alden Gonzalez (via Twitter). That extra cushion could make the Halos an even more active buyer on the summer trade market than had already been expected.

3:17pm: The wording of the deal — “in exchange for a player to be named later or cash considerations” — is a mere formality, tweets Jeff Wilson of the Fort Worth Star-Telegram. A source tells Wilson that the Rangers aren’t giving up anything of real value to acquire Hamilton.

2:34pm: The Rangers announced today that they have re-acquired outfielder Josh Hamilton from the Angels in exchange for a player to be named later or cash considerations. The Rangers will also be receiving cash from the Angels, the team added, and previous reports have indicated that Texas will be on the hook for less than $7MM of the money that is he owed. To clear a spot on the 40-man roster, right-hander Nick Tepesch has been transferred to the 60-day DL. 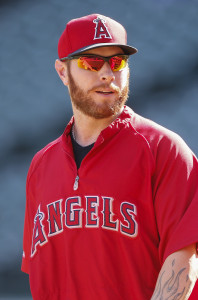 The transaction represents a homecoming of sorts for Hamilton, who was named the American League MVP as a member of the Rangers in 2010 and appeared in five consecutive All-Star games with Texas from 2008-12. The Rangers will reportedly pay Hamilton just $2-3MM of what he’s owed, and Hamilton will give up about $6MM worth of guaranteed money, which will be offset by the lack of income tax in the state of Texas. The Angels are saving somewhere in the vicinity of $8MM of what he’s owed over the rest of his contract, and the deal has reportedly been restructured to give Hamilton an opt-out clause with a significant buyout following the 2016 season.

Hamilton’s return to Texas was, of course, prompted by a relapse into substance abuse this offseason that led to a perhaps too-public look into the outfielder’s personal life and created a great deal of drama and controversy. After a panel composed of two league officials and two players union representatives deadlocked on whether or not Hamilton had violated his treatment program with the relapse, an arbitrator ruled that he had not, and therefore could not be suspended by the league. The news came as a surprise to many, and reports indicated that commissioner Rob Manfred had indeed intended to suspend Hamilton before the arbitrator eliminated that as a possibility. While the factors that led to the ruling remain unknown, Hamilton likely helped his cause by coming forth voluntarily and admitting his relapse.

Today’s trade brings to a close a tenure with the Angels that was marred not only by this most recent controversy, but also by injuries and a failure to live up to the lofty expectations that came along with his hefty five-year, $125MM contract. Hamilton was not entirely unproductive for the Halos, as his .255/.316/.426 batting line translated to a 110 OPS+. However, the level of production that he provided certainly didn’t line up with his average annual salary of $25MM, or even the $34MM he received in 2013-14 on the backloaded contract. The Angels, of course, will remain on the hook for the majority of that salary.

Hamilton and the Rangers will both hope that a return to a familiar environment will help to rekindle some of the production that made him one of the most feared hitters in baseball for half a decade. From 2008-12, .305/.363/.549, averaging 28 homers per season and 36 per 162 games played. Once he’s fully recovered from shoulder surgery, which should be in mid-to-late May, Hamilton will presumably slide into left field. Texas currently has little in the way of long-term options at the position, with the possible exception of Ryan Rua, who is currently on the shelf sprained ankle and a fracture in his right foot. Opposite Hamilton will be another corner outfielder whose production has yet to live up to his eye-popping contract — Shin-Soo Choo. That Rangers’ hopes for contention in the near future will now be tied to the performance of that duo, as well as first baseman Prince Fielder, as the three under-performing but well-compensated former All-Stars have each been shadows of their former selves in recent years.

Of course, though Hamilton hasn’t been gone from the Rangers for that long, the organization still looks markedly different than it did in his final year. Manager Ron Washington abruptly resigned late last season, and he’s since been replaced by Jeff Banister, whose hiring prompted former bench coach (and managerial hopeful) Tim Bogar to join the Angels. Michael Young has retired, while Ian Kinsler has been traded to the Tigers. Nelson Cruz has signed a pair of free agent contracts with other teams since Hamilton’s departure, and Mike Napoli is in his third year with the Red Sox. The team is not without its share of familiar faces for Hamilton, however, as he’ll be reunited with the likes of Adrian Beltre, Elvis Andrus, Leonys Martin, Neftali Feliz, Derek Holland and Colby Lewis, among others.

Billy Casey of Shutdown Inning and Brandon Land of One Strike Away first reported trade talks between the two sides more than a week ago. SI.com’s Michael McCann reported that the Angels could part with him in a matter of days, and FOX’s Ken Rosenthal reported that a trade was looming (Twitter links). MLB.com’s T.R. Sullivan first tweeted that a trade to the Rangers was close, and CBS’ Jon Heyman added that an agreement was in place. Evan Grant of the Dallas Morning News and Jeff Wilson of the Fort Worth Star-Telegram each added details on the financial components of the trade, with Grant adding mention of the opt-out clause. Mike DiGiovanna of the L.A. Times tweeted that everything was done, pending league approval, and MLB.com’s Alden Gonzalez was the first to tweet that the deal would be likely announced on Monday. Heyman tweeted shortly before the announcement that the deal had been finalized.