The Braves have acquired first baseman Matt Adams and cash considerations from the Cardinals for minor league infielder Juan Yepez, according to an announcement from Atlanta. In a corresponding move, the Braves have designated catcher Anthony Recker for assignment. 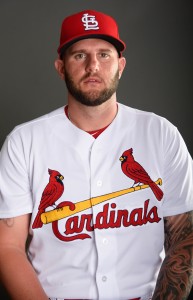 The Braves already have one of the elite first basemen in baseball in Freddie Freeman, but he suffered a fractured wrist earlier this week and could miss nearly three months. Without any obvious replacements inside the organization – including the recently signed but highly flawed James Loney – the Braves ventured to the trade market for Adams, who MLBTR’s Steve Adams suggested would be a sensible fit in the wake of Freeman’s injury.

Matt Adams was the Cardinals’ primary first baseman from 2013-14, when he combined to hit .287/.327/.474 in 882 plate appearances, but both his performance and playing time have fallen off dramatically since then. The Cardinals moved former third baseman/second baseman Matt Carpenter to first in the offseason, further decreasing Adams’ chances of picking up at-bats in St. Louis. After it was unable to trade Adams over the winter, the club tried the big-bodied 28-year-old in the outfield earlier this season as a way to get his bat in the lineup. However, the Cardinals quickly abandoned that experiment after Adams fared poorly in the grass. Consequently, Adams has totaled just 53 plate appearances this season, hitting .292/.340/.396 along the way.

Having combined for 12 Defensive Runs Saved and a 4.6 Ultimate Zone Rating in nearly 3,000 career innings at first base, Adams should fill in for Freeman with aplomb in the field. But there will be a major drop-off at the plate, especially given that the lefty-swinging Adams has essentially been unusable against southpaws during his career. Adams has posted a woeful .210/.240/.348 line in 283 PAs versus lefties, making him a platoon bat, though the Braves don’t currently have any right-handed hitters with significant first base experience on their bench.

Regardless of Adams’ flaws, the Braves’ hope is that he’ll help them stay afloat in the National League until Freeman returns. Once that happens, the Braves will likely relegate Adams to a pinch-hitting role, and they’ll then have to decide whether to keep him over the winter as he enters his final arbitration-eligible season. Adams is currently on a $2.8MM salary.

To acquire nearly two years of control over Adams, the Braves surrendered a relatively anonymous prospect in the 19-year-old Yepez, whom they signed out of Venezuela in 2014. The majority of Yepez’s work since last season has come at the Single-A level, where he has batted .275/.309/.387 in 152 PAs this year. When Yepez joined the Braves, Baseball America’s Ben Badler wrote that the righty-swinger has “quick hands, a loose swing and good balance with solid power,” adding that his future could be at either corner infield spot. This past winter, Eric Longenhagen of FanGraphs credited Yepez for his “above-average raw power,” but he suggested that Yepez will need to vastly improve his approach to remain a prospect.

As for Recker, he joined the Braves last May in a trade that saw them send cash considerations to Cleveland. Recker picked up 112 PAs with the Braves last season and held his own with a .278/.394/.433 line. The 33-year-old has tallied just seven major league PAs this season, though, as Atlanta has gotten terrific production from fellow backstops Tyler Flowers and Kurt Suzuki.