By my count, there are currently around 40 remaining free agents who seem likely to receive Major League contracts eventually.  Approximately 70 additional free agents might have been minor league deal candidates even in a normal offseason.  This offseason has been decidedly abnormal in the sheer volume of quality unsigned players as spring training camps open around baseball.

As a result of MLB’s Neverending Offseason, the players’ union decided to open up a spring training camp for the many unsigned free agents.  The location: IMG Academy in Bradenton, Florida.  According to USA Today, the first workout is today.  Former Astros manager Bo Porter is set to preside over the proceedings. 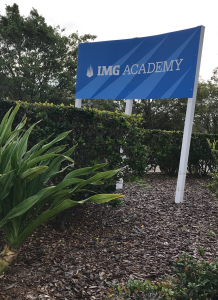 We knew going in that the MLBPA decided not to allow media at this camp.  But I decided, “What the hell,” and sent veteran reporter Joey Johnston out to IMG this morning in an attempt to find a story.  The effort was a total bust.  According to Johnston, IMG is a sprawling facility, “almost Disney World-like where you can’t see anything unless you are inside.”  There is a fenced-in, guarded gate.  When Johnston inquired with a guard if he might wait around the perimeter, his reply was, “We were vehemently told there would be no public access.  No one gets in there.  No one.”

From what Johnston could tell, the players are housed on-site, so they can’t be spotted driving in or out.  No other media or fans were present.  Johnston concluded, “If they wanted total lockdown, they appear to have achieved that goal.” That’s also the sense that team personnel are evidently being given. As Ken Rosenthal of The Athletic tweets, a club exec tells him that a special assistant sent to scout “was asked to leave the workout” and “escorted out” of the IMG facility. Of course, as he adds in a follow-up tweet, private workouts can be set up with individual players.

Based on Johnston’s account, the MLBPA’s free agent camp is not some kind of 31st spring training camp.  In fact, the situation at IMG runs directly counter to the laid-back, relatively accessible vibes of a typical spring training facility.

Why did the MLBPA decide to conduct their camp this way?  I’d have asked director of communications Greg Bouris for comment, but he resigned this week after serving in the role for 19 years.  Craig Calcaterra of Hardball Talk recently posited a theory: “I suspect the union does not want its free agents being the subject of sad stories in which they’re cast as hopeless or pathetic or facing the end of their careers.”

I think Craig is on to something.  It seems likely the camp itself would come off as a sad affair.  We know the Boras Corporation’s clients are not attending, and that includes top free agents in J.D. Martinez, Eric Hosmer, Jake Arrieta, Mike Moustakas, and Greg Holland.  I inquired with three additional major agencies with notable free agents, and have come up empty in identifying one who will be in attendance.  No one seems to know which or how many players will be attending – not even Bo Porter, according to Bob Nightengale of USA Today.

From afar, it appears that the players’ union is missing an opportunity to win over fans, whether directly by being accessible or by openly letting attending free agents talk to the media.  As Meg Rowley noted for FanGraphs on Monday, the general public typically does not side with the players in a labor dispute of this nature, though one possible messaging strategy could be to hammer on the many teams that are not trying to win this year.  We established our own evidence of baseball fans’ sentiments last week, when over 73% of the 23,000 respondents in an MLBTR poll said players are overpaid. As I noted in that post, there are plenty of reasons to believe otherwise, but at the moment that message does not seem to be getting through to fans.