TODAY: The deal is expected to send righty Ross Stripling to the Halos and also involves other prospects going to the Dodgers, per Bob Nightengale of USA Today (via Twitter). It has yet to be finalized, though, and “a lot of moving parts” remain.

Stripling has quietly been an extremely effective MLB hurler over the years, turning in 387 career innings of 3.51 ERA ball with 8.8 K/9 and 2.1 BB/9. There have been some health issues at times, but the swingman has been quite good when available. He’s slated to earn $2.1MM this year with two more seasons of team control remaining thereafter.

10:14pm: This trade will include more players, pending medical reviews, Passan tweets. The Angels will also get “a big league starter and a prospect,” while the Dodgers will pick up a prospect along with Rengifo, per Fabian Ardaya of The Athletic.

8:54pm: The Angels are set to acquire outfielder Joc Pederson from the Dodgers, Ken Rosenthal of The Athletic first reported. The Dodgers will get infielder Luis Rengifo in the deal, per Jeff Passan of ESPN. 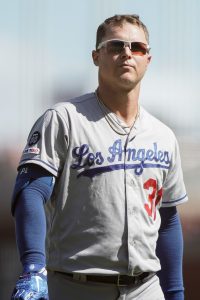 This has been a wild night for the Dodgers, who previously struck an absolute blockbuster delivering former Red Sox superstar Mookie Betts and lefty David Price to LA. The Dodgers let go of outfielder Alex Verdugo in the deal and sent righty Kenta Maeda to the Twins in what will go down as one of the most memorable trades in recent baseball history.

This move’s quite an encore for the Dodgers, whose outfield has undergone massive changes in a small amount of time. Pederson and Verdugo were regulars last season, a 106-win campaign for the club, but now the unit’s fronted by two MVP winners in Betts and Cody Bellinger. There’s also the well-compensated A.J. Pollock and depth on hand in Chris Taylor, Enrique Hernandez and Matt Beaty.

To at least some extent, the Dodgers will miss the 27-year-old Pederson, who has been an easily above-average hitter since his first full season in 2015. Pederson’s now coming off a typically productive showing in 2019, when he slashed .249/.339/.538 with 3.0 fWAR and a a career-high 36 home runs in 514 plate appearances. If there’s one major knock on Pederson’s offense, it’s that the left-hander has struggled versus southpaws, who have held him to an awful .188/.263/.310 line during his time in the bigs.

Now a member of the Angels, Pederson will join yet another jam-packed outfield. The group’s headlined by center fielder Mike Trout, of course, with Justin Upton holding down left field. Brian Goodwin had been the projected starting right fielder before Tuesday, but he looked like a placeholder before the forthcoming promotion of elite prospect Jo Adell. Now, it’s unclear exactly how the Angels’ right field situation will shake out in 2020. Regardless, they’ll tack on approximately $8.5MM to their payroll for Pederson, who’s in his last year of arbitration eligibility. Landing him is the latest aggressive pickup in an offseason that previously saw the Angels add Anthony Rendon, Jason Castro, Julio Teheran and Dylan Bundy to a team that hasn’t made the playoffs since 2015.

In Rengifo, the Angels are giving up a 22-year-old fresh off a promising first season in the majors. The switch-hitter slashed .238/.321/.364 during a 406-plate appearance span in which he mostly lined up at second base. As recently as last February, FanGraphs ranked Rengifo as the Angels’ seventh-best prospect, giving him a chance to turn into a “regular second baseman.” That’ll be a difficult task now for Rengifo, who’s joining a loaded Dodgers team with Taylor, Hernandez, Max Muncy and Gavin Lux as second base possibilities. Rengifo does have two minor league options remaining, however, so it’s not majors or bust for him.