THURSDAY: Marmol has cleared outright waivers and accepted an assignment to Triple-A, according to Ken Gurnick of MLB.com (on Twitter).

WEDNESDAY, 11:54am: Gammons tweets that Marmol has already been placed on outright waivers. Jon Heyman of CBS Sports tweets that the outright move is procedural. Marmol has agreed to go to the minor leagues and try to work out his struggles there.

10:35am: The Dodgers have designated Carlos Marmol for assignment, according to Peter Gammons of the MLB Network (on Twitter). Gammons reports that the Dodgers were only interested in the international bonus slot they acquired in the deal, not in retaining Marmol as a member of their bullpen.

The Dodgers made what appeared to be a puzzling trade yesterday, dealing the recently DFA'ed Matt Guerrier to the Cubs in exchange for Marmol and an international bonus slot worth an additional $209,700. The Dodgers spent about $500K of actual money to acquire just under $210K of pool money, which makes sense, as international spending dollars carry more value than standard dollars due to bonus pool limitations.

In a swap of relievers who had been designated for assignment, the Cubs announced they have acquired Matt Guerrier from the Dodgers for Carlos Marmol and Chicago's fourth international signing bonus slot.  That slot is worth $209,700 in pool money, announced the Dodgers, who had a pool of $2,112,900. 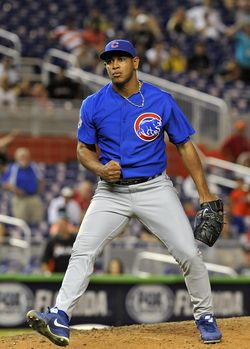 Of Marmol's $9.8MM salary this year, about $4.8MM remains.  The Cubs will pay nearly $2MM of his salary, tweets Yahoo's Tim Brown, plus the aforementioned pool money.  Guerrier earns $3.75MM this year (plus a $750K installment of his signing bonus) in the final season of his three-year deal with Los Angeles. He has about $2.34MM remaining, so the Cubs will only save about $500K in the deal, as noted by Dylan Hernandez of the L.A. Times (on Twitter).

ESPN's Jayson Stark adds that if the Dodgers end up releasing Marmol and he signs with another team, the Cubs will need to send additional money to the Dodgers (Twitter link).

Marmol had become a symbol for the Cubs' struggles this year, with a 5.86 ERA, 6.8 BB/9, and 1.95 HR/9 in 27 2/3 innings.  He began the season as the team's closer, apparently as a way of building trade value, but lost the job after allowing five runs in his first three outings.  Marmol, a converted catcher/outfielder, joined the team's bullpen in 2007, snagged an All-Star nod in '08, and ascended to the Cubs' closing job late in 2009.  He peaked in 2010, striking out nearly 42% of batters faced while racking up 38 saves.  That season earned him a three-year, $20MM extension in February 2011.  Marmol had always had major problems with walks, and now the team has finally moved him in a bad contract swap.  During November of last year, it seemed like Marmol was headed to the Angels for Dan Haren before the Cubs pulled the plug and the Halos declined Haren's club option.

The Dodgers will send Marmol to the minors for a few outings, notes ESPN's Keith Law.  The Dodgers are second-to-last in bullpen ERA in the NL, with a 4.39 mark.  The club is eight games out in the wild card; should they pull closer to contention perhaps they'll acquire a more stable reliever.

Guerrier, 34, posted a 4.80 ERA, 6.3 K/9, 3.6 BB/9, 0.90 HR/9, and 42.6% groundball rate in 30 innings for the Dodgers this year before being designated for assignment.  The Dodgers signed him to a three-year, $12MM deal in December 2010, with that third year serving as the kicker.  The Cubs also added Pedro Strop to their bullpen earlier today; they may yet ship closer Kevin Gregg to a contender.

6:54pm: If the Dodgers get Marmol, the Cubs would pay most, if not all, of the $5MM owed to him tweets Ken Gurnick of MLB.com.  The Cubs might also get a player recently removed from the Dodgers' roster.  Gurnick doesn't specify, but the recently DFA'd Matt Guerrier would fit the bill.

4:27pm: The Dodgers are closing in on a trade to acquire Carlos Marmol from the Cubs, according to Bruce Levine of ESPN Chicago. Marmol was designated for assignment by the Cubs last week.

There are some hurdles left, as the Dodgers are on Marmol's limited no-trade list, and he's owed about $5MM for the rest of the season. The Dodgers are expected to absorb some of the salary and it's unclear which player or players might be heading to Chicago, according to Levine.

Marmol has a 3.50 ERA with a healthy 11.7 K/9 in 542 1/3 career innings, but he's also averaged 6.1 walks per nine innings pitched. Those command problems have worsened over the past two seasons, and his strikeout rate has dropped in 2013. He is in the final season of a three-year, $21MM extension he signed in early 2011.

If you're looking for some good reading over your Saturday morning coffee, here are a few nice leftovers from yesterday: Writing for Fangraphs, MLBTR contributor Marc Hulet broke down the position players who will participate in the MLB Futures Game. MLB.com's Corey Brock had the story of former third-overall pick Donavan Tate's attempt to revive his injury- and addiction-plagued career. Writing for the Biz of Baseball, Maury Brown discussed the decline in MLB and MiLB PED suspensions thus far in 2013. And as the Washington Post's Dave Sheinin reports, youth baseball is experiencing what could be an inner-city renaissance in Washington, D.C. On to some National League notes:

Yesterday the Cubs finally parted ways with embattled former closer Carlos Marmol, and they also cut ties with Ian Stewart after his harsh Twitter outburst against the team earlier this month. Here's more out of the NL Central… 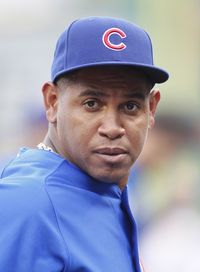 Despite reports over the weekend that the Astros and first overall pick Mark Appel have already agreed to terms on a below-slot contract, GM Jeff Luhnow today told reporters (including MLB.com's Brian McTaggart and Chris Abshire) that nothing is official and he has yet to meet with Appel or advisor Scott Boras.  "We're trying to move it as fast as we can," Luhnow said. "We wanted to give [Appel] the weekend to enjoy his commencement. We're optimistic we can move it pretty quickly."  Luhnow said he hoped that Appel would be signed by as soon as this week.

The Cubs are 12-20 on the season, good for the second-worst record in the National League.  On the plus side, four of their five starting pitchers have performed well, and the team has shown surprising power in the early going.  The latest on the North Siders:

Today is Cinco de Mayo, a celebration of Mexican heritage, pride, and culture. The holiday traces its roots to the Battle of Puebla in 1862 where the undermanned Mexican army defeated the French, regarded as having the world's premier army at the time. More than 100 Mexican nationals have played Major League baseball, including Cardinals' lefty Jaime Garcia and Brewers' righty Marco Estrada. The pair squared off against each other at Miller Park this afternoon in the first-ever matchup between two Mexican-born starting pitchers on Cinco de Mayo and the 37th such meeting overall (per the Brewers via the Elias Sports Bureau). Garcia was masterful scattering eight hits across eight innings in the Cardinals' 10-1 victory. Estrada, meanwhile, channelled the French army allowing eight runs and six hits while issuing a career-high five walks (two with the bases loaded). Adding insult to injury, Chorizo lost the Sausage Race (h/t Adam McCalvy of MLB.com via Twitter). Por otras partes en béisbol: