The NFL Draft is just hours away! Whether you’re a hardcore football fan or a casual Sunday watcher, you’re going to want to follow every draft pick, trade, and rumbling with Pro Football Rumors (@pfrumors on Twitter).

So far, the Bengals have laughed off every trade offer for their No. 1 pick, but the Dolphins won’t take no for an answer. The ‘Fins are trying to trade for the Lions’ No. 3 pick, keep their own pick at No. 5, and ship both of ‘em Cincinnati for the top choice. The Bengals have been laser-focused on Joe Burrow for months, but the Dolphins believe they can change their minds with a ludicrous package.

Beyond that, practically every other pick is in play. The Dolphins, Falcons, and Tom Brady’s Buccaneers are all exploring aggressive leaps to move up the board. Meanwhile, the Lions, Panthers, and Jaguars are willing to part with their Top 10 picks, if the price is right. Oh, and tons of big-name veterans are on the block, too – Redskins left tackle Trent Williams, Jaguars defensive end Yannick Ngakoue, and Buccaneers tight end O.J. Howard, just to name a few.

The NFL Draft kicks off tomorrow night. If you’re a football fan, it’s already appointment television. If you’re more of a casual NFL fan, you may want to tune in anyway. (Save the second watch of Tiger King for next week.)

To start your draft prep today and stay tuned for every pick, trade, and rumbling – visit ProFootballRumors.com and follow PFR on Twitter, @pfrumors.

Quarterback Joe Burrow – who threw for 60 touchdowns last year at LSU – is a mortal lock for the Bengals at No. 1. Beyond that, everything is up for grabs. The Redskins are reportedly listening to calls for the No. 2 pick, so they could conceivably be tempted enough to pass on a potential generational talent in Ohio State’s Chase Young. The Lions (No. 3) and Giants (No. 4) are also answering the phone, so this year’s top rookies could all be up for grabs.

Meanwhile, Rob Gronkowski is headed to Tampa Bay to rekindle his bromance with Tom Brady. Seven-time Redskins Pro Bowler Trent Williams could be the next superstar on the move.

That’s just a snapshot of what’s going on in the NFL right now. For the full scope of things, stay tuned to ProFootballRumors.com and follow PFR on Twitter, @pfrumors.

There’s no stopping the NFL offseason. Whether you’re a hardcore football fan or a casual Sunday watcher, you can follow every draft pick, trade, and rumbling with Pro Football Rumors (@pfrumors on Twitter).

The “fully virtual” NFL Draft is just around the corner with several potential superstars on the board. At No. 1, the Bengals seem keyed in on quarterback Joe Burrow, who threw for 5,671 yards, 60 touchdowns (!), and just six interceptions in his final year at LSU. Then, at No. 2, the Redskins could snag Chase Young, an absolute sack machine who could be a generational talent in the making.

Beyond that, the draft is wide open: The Lions are listening to offers for the No. 3 pick and the Giants are “open for business” at No. 4. The Dolphins, at No. 5, are one of several teams that could be tempted to move up for their next QB, which could be Alabama’s Tua Tagovailoa or Oregon’s Justin Herbert.

For the latest on the draft, free agency, and more from this wild NFL offseason, stay tuned to Pro Football Rumors and follow along on Twitter, @pfrumors.

The NFL Draft is just hours away! This year’s draft is full of intrigue and you’ll want to stay tuned to Pro Football Rumors, whether you’re a hardcore football fan or just a casual observer.

With just hours to go, we still don’t know who the Browns will take with the No. 1 overall pick. For weeks, the Browns were closely linked with USC quarterback Sam Darnold or Wyoming QB Josh Allen, but more and more people in the football world are starting to believe that they’ll take the talented, yet undersized, Baker Mayfield instead. Meanwhile, Allen is in the midst of a controversy that could impact his draft stock.

With multiple possibilities at the top, the Giants (No. 2) and Jets (No. 3) are preparing for every possible scenario. The Giants have been widely connected to Penn State running back Saquon Barkley and are divided on this year’s top QB prospects, but it’s still entirely possible that they’ll use this opportunity to tab Eli Manning’s successor. The Jets had been wrestling with whether to take Mayfield or UCLA QB Josh Rosen, but they could have an opportunity to snag Darnold, which at one point seemed unthinkable. At the same time, Jets coaches are pushing the front office to take Allen, if he’s there.

This year’s draft is one of the most uncertain in recent memory and you’ll want to follow along every step of the way. To stay plugged in with up-to-the-minute updates, follow Pro Football Rumors on Twitter: @pfrumors.

NFL free agency officially kicks off today! To keep up with all of the madness, stay tuned to Pro Football Rumors and follow PFR on Twitter, @pfrumors.

On Tuesday, some of the biggest names in this year’s crop came off of the board, including Kirk Cousins, Sammy Watkins, Allen Robinson, and Dion Lewis. However, there are still tons of difference-makers left.

Pro Football Rumors has every bit of news covered with the up-to-the-second coverage and analysis you’ve come to expect from the Trade Rumors family. Whether you’re keeping track of your favorite NFL team’s moves or just getting an early jump on your fantasy football research, PFR is a must-follow, particularly during this time of year.

In addition to following PFR on Twitter and bookmarking the site, you can also keep tabs on the world of football with the free Trade Rumors app, available for iOS and Android. With the app, you also gain access to MLB Trade Rumors, Hoops Rumors, and Pro Hockey Rumors, ensuring you’ll never miss a signing, cut, or trade across the four major sports.

We’re looking to add part-time contributors to the Pro Football Rumors writing team. The position pays on an hourly basis. Applicants must meet ALL of the following criteria:

If you’re interested, email pfrapplications@gmail.com by February 9 (11:00pm central time) and take a couple of paragraphs to explain why you qualify and stand out. Many will apply, so unfortunately we cannot respond to every applicant.

We’re looking to add part-time contributors to the Pro Football Rumors writing team. The position pays on an hourly basis. Applicants must meet ALL of the following criteria:

If you’re interested, email pfrapplications@gmail.com by September 24 (11:00pm central time) and take a couple of paragraphs to explain why you qualify and stand out. Many will apply, so unfortunately we cannot respond to every applicant. 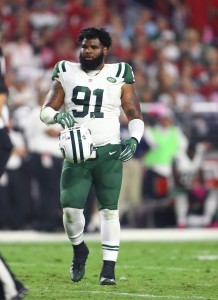 The NFL Draft is here!  This year’s draft is the hardest one to predict in recent memory and you’ll want to stay tuned to Pro Football Rumors for every update whether you’re a casual or hardcore NFL fan.

The draft is hours away and we still don’t know who the No. 1 overall pick will be.  Most of the football world views Texas A&M defensive end Myles Garrett as the top overall talent in this year’s class, but Browns ownership is reportedly pushing for UNC quarterback Mitch Trubisky.  If the Browns bypass the best player available in favor of the best quarterback available, it will trigger a ripple effect that will turn the rest of the first round upside down.

The uncertainty doesn’t stop there. The 49ers could break with tradition and select running back Leonard Fournette at No. 2.  The Bears, at No. 3, are eager to trade down.  The Jaguars, picking at No. 4 overall, are reportedly considering Clemson quarterback Deshaun Watson, a player previously projected as a late first round or early second round type.  With so many question marks early on, the entire draft is in flux and things could get insane.  We mean that in a good way.

NFL free agents can’t officially ink their deals with clubs until this afternoon, but the transaction frenzy is already in full swing.

The Patriots shocked everyone by signing cornerback Stephon Gilmore, the Browns landed wide receiver Kenny Britt, and the Bears have agreed to pay quarterback Mike Glennon upwards of $45MM on a three-year deal.   Meanwhile, defensive lineman Calais Campbell is apparently waffling on a rumored deal with the Jaguars and could sign with the Broncos.  Some big names have come off the board, but tons more remain including Texans free agent cornerback A.J. Bouye, Bears wide receiver Alshon Jeffery, and Chiefs defensive tackle Dontari Poe.

On top of that, we still don’t know where superstars Tony Romo and Adrian Peterson will wind up, and the Patriots just might complete their second trade of the week by acquiring stud wide receiver Brandin Cooks from the Saints.

If you haven’t been following NFL free agency to this point, you can get a quick crash course by checking out PFR’s Free Agent Power rankings, which are based on the potential earning power of each player on the open market.  We’ve also broken down the top offensive and defensive free agents by overall ability.

Whether you’re an NFL diehard or just a casual fan, you won’t want to miss out on all of this.  Follow @pfrumors on Twitter and head to ProFootballRumors.com now to get up-to-the-second updates on everything going down.