Jon Heyman of CBS Sports has some details on the incentive structures of a trio of late signings from the offseason, so let’s take a look (All Twitter links)…

3:30pm: Cabrera’s incentives are tied to plate appearances, and max out with his 500th turn at the dish, Rich Dubroff of CSNBaltimore.com tweets.

8:17am: The Orioles on Wednesday announced that they’ve added some infield insurance by agreeing to a one-year, Major League deal with former Padres shortstop Everth Cabrera. The Scott Boras client will reportedly earn $2.4MM and has the opportunity to earn as much as $600K more via incentives. 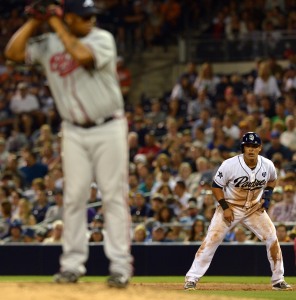 That guarantee makes Cabrera the largest investment of the offseason for the O’s. He comes in just ahead of those given to the team’s two other major league signings this offseason: Delmon Young ($2.25MM) and Wesley Wright ($1.7MM).

Cabrera, 28, was non-tendered by the Padres earlier in the offseason. He is coming off of an undeniably rough stretch in his personal and professional life. A 50-game PED suspension cut short an otherwise promising 2013 campaign, and Cabrera is still facing possible jail time relating to a charge for resisting arrest. And when he was on the field last year, Cabrera largely disappointed, hitting a meager .232/.272/.300 in his 391 plate appearances and seeing his stolen base tally drop to 18.

Of course, those issues come with undeniable upside. Over the 2012-13 campaigns, the switch-hitter slashed .264/.339/.352 and swiped 84 bags in an even hundred attempts. With solid defense at short thrown into the mix, Cabrera has played at a 3+ WAR clip for the better part of a MLB season.

As MLBTR’s Steve Adams recently noted, one attractive aspect of Cabrera is the fact that he comes with team control for another year. That effectively amounts to a club option, with the value to be determined through the arbitration process. Speaking of options, as Roch Kubatko of MASNsports.com notes on Twitter, Cabrera can be optioned for one more season. That is another nice bit of flexibility, especially for an Orioles club that makes heavy use of the shuttle between the bigs and Triple-A.

Given that Baltimore has committed to J.J. Hardy for three more years, Cabrera would figure to provide competition at second base and another utility option. While Jonathan Schoop handled himself well at the position defensively, he struggled mightily at the plate. The two could be deployed in some kind of platoon capacity, of course, though Schoop bats from the right side and Cabrera has traditionally fared better against left-handed pitching. Baltimore also has used the left-handed-hitting Ryan Flaherty quite a bit over the past two years, but could find himself battling with Schoop for a roster spot.

Everth Cabrera’s one-year deal with the Orioles is now official, but manager Buck Showalter tells Eduardo A. Encina of the Baltimore Sun that even though the former Padre signed a big league deal, he’ll have to earn a roster spot this spring. Cabrera has a minor league option remaining and could head to Triple-A Norfolk if he doesn’t perform well. Showalter acknowledges that there’s some risk in the signing, given Cabrera’s checkered past, but he’s been told good things from people in the NL West. “There’s some upside there for sure,” said Showalter. “…There’s some unknown for me about him. The one division that I’ve constantly got to lean on people that I really trust is the National League West. … There’s just a lot of unknown for East Coast teams.”

Blue Jays GM Alex Anthopoulos says it’s easy to do business with A’s GM Billy Beane thanks to the rapport he has with him, MLB.com’s Mike Bauman writes.  “I have a pretty good relationship with Billy Beane,” Anthopoulos said. “We’ve done a bunch of small deals. The one thing about Billy, he’s always open-minded and you can never offend him; you can ask about anybody at any time to make a deal.”  The two execs got together in November for the deal that brought Josh Donaldson to Toronto.  Here’s more from the AL East..

The agent for Cuban teenager Yoan Moncada, David Hastings, says that “offers are coming in,” Jon Morosi of FOX Sports tweets. Hastings says he is “still hopeful” that he and his client “can make a decision soon.” Last we heard from Hastings, on Valentine’s Day, he indicated that no formal offers had been made and softened somewhat the idea that Moncada would be in position to sign by February 23rd. While there appears to be some movement, the precise timeline remains uncertain.

Yankees GM Brian Cashman feels that the potential is there for a big year, but he’s not guaranteeing the AL East title or anything of that sort, as Nick Cafardo of the Boston Globe writes.  “We have a lot of talent,” he said. “Like other teams, we have some ifs. If we get good comebacks and our rotation stays healthy, if our team stays healthy, we’re a good team.”   Additions like Andrew Miller will be counted on for production, but the Bombers will really hope for some vintage performances from guys like Mark Teixeira, Carlos Beltran, and embattled third baseman Alex Rodriguez.  Here’s more from today’s column..

The free agent cupboard is mostly bare, with James Shields, Francisco Rodriguez and Rafael Soriano representing the only three available names that made MLBTR’s Top 50 list heading into the offseason. However, there are still some remaining names that provide a certain level of intrigue, and each of the names in question in this post was ineligible for the list at the time it was released.

Each year, teams non-tender players (or, in some cases, tender the player but ultimately release him) in order to avoid paying a significant raise in arbitration. These players hit the open market like any other name, but so long as they have less than five years of service time, they come with an added bonus: they’re controllable beyond the coming season, even upon signing a one-year deal. Examples of players to have already done this are Alexi Ogando (Red Sox), Josh Outman (Braves) and Justin Smoak (Blue Jays). Each player received a one-year big league deal but will be controllable through at least the 2016 season via arbitration. Here’s a quick look at four others who come with that same perk…

Of course, not all of these players will sign Major League deals. Young, in particular, seems like a candidate for a minor league pact, in my estimation. However, upon making the club, the same service time caveats would apply. On a free agent market that is rapidly thinning out, these four players offer a bit of upside that could secure them a job beyond the 2015 campaign, as was the case with Justin Turner, Michael McKenry and Garrett Jones last offseason.

As it always does, the free agent market contains some fairly noteworthy names entering the final month before Spring Training. A good portion of the value at the top of the leftover market lies in established names who have been reliable, healthy, and good in the recent past: James Shields, Francisco Rodriguez, and the like.

Some of those types of players may be a bit long in the tooth, perhaps, or might lack upside or be coming off of a somewhat down 2014 season. But there are teams with expectations of contending that are interested in signing them and plugging them into important roster slots. This segment of the market contains relative certainty.

But as much as the solid veteran group is useful, it is entirely less interesting than the array of wild cards that also remain to be signed. For another market niche, comparative youth, talent, and/or upside marry with various issues, inconsistency, and/or injury. Some such players will surely flame out, never to be heard from again, but it is likewise possible that one or more will re-establish themselves as quality regulars and deliver immense value to their new teams.

If you are a fan of a team that wants someone to dream on without breaking the bank (or even committing a big league roster spot, in some cases), consider one of these players from the scratch-and-dent market:

In an interview with Mike Ferrin and Jim Duquette on MLB Network Radio on Sirius XM (audio link), Rays president of baseball operations Matt Silverman said his team will scout Yoan Moncada as they would any prospect of “great intrigue,” but “given our financial situation, I wouldn’t expect us to be the winners of an auction.”  Silverman feels this is another example of how difficult it is for successful small-market teams to replenish their systems, as “all of the [player acquisition] structures, whether it’s the draft or international, put us at a disadvantage.”

The free agent market for Max Scherzer has been anything but traditional, writes MLB.com’s Mike Bauman. As Bauman notes, the dearth of clubs that have acknowledged interest in Scherzer is particularly peculiar, as is the fact that there have been little to no leaks of serious interest. Meanwhile, ESPN’s Jim Bowden (Insider required) spoke to a number of GMs, assistant GMs, managers, players and agents trying to pin down Scherzer’s market. As Bowden writes, while he often came up empty, that doesn’t necessarily mean much, as Scherzer is an ownership-level decision, and not all owners don’t always keep the front office in the loop. Beyond that, many owners consider Scherzer’s exorbitant price tag a final option of sorts and will only relent once it becomes clear that a potentially more affordable alternative — e.g. a trade for Cole Hamels, Jordan Zimmermann or Johnny Cueto — is not possible. Bowden lists the Tigers, Red Sox, Dodgers, Yankees, Nationals, Marlins, Giants and Blue Jays as theoretical fits, noting that he doesn’t expect the latter two would make an offer. The Tigers are still the favorites in Bowden’s eyes, while multiple Yankees officials would “love” to have Scherzer (despite the club’s public and private denials). He adds that the Nationals could conceivably sign Scherzer if they move Zimmermann and/or Ian Desmond for younger pieces, knowing each has just one remaining year on his contract and has rebuffed the team’s previous efforts at working out a long-term deal.

Some more free agent notes from around the league…