With Winter Storm Ion pummeling the eastern half of the United States, let's warm ourselves on the Hot Stove with the latest National League news and notes:

Justin Morneau sounded certain in stating that he will one day return to the Twins in some capacity but acknowledged that it's not likely to be in 2014, writes Phil Miller of the Minneapolis Star Tribune. Said Morneau: "There’s no saying I won’t be back in the future. You never know what the opportunity is going to be, whether it’s as a player, later, or as a coach, or someone who comes down to spring training. Whatever it is, it’s a different chapter, but [Minnesota] is something that will stick with me forever." Morneau made his first Twin Cities public appearance since being traded over the weekend, signing autographs and thanking fans for donating to a drive that raised more than 3,000 coats for the Salvation Army. Morneau told Miller that he's spoken recently with longtime teammate and friend Michael Cuddyer, who put in a good word for the Rockies. More on the Twins…

Here's the latest from the City of Brotherly Love… 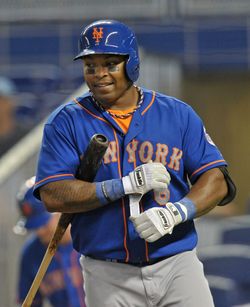 Here are a handful of odds and ends from this afternoon's trade between the Mets and Pirates, in which the Bucs received outfielder Marlon Byrd, catcher John Buck and cash in return for second base prospect Dilson Herrera and a PTBNL.

One day after learning that ace Matt Harvey has a torn UCL in his right elbow, ESPNNewYork.com's Adam Rubin reports that the Mets are poised to be active on the trade front in the final days of August. According to Rubin, five players have been placed on revocable trade waivers, and at least one trade is likely in the next 24 to 48 hours.

Marlon Byrd, John Buck and Pedro Feliciano are three of the players to hit waivers, and the Mets have already recalled lefty Robert Carson, catcher Anthony Recker and outfielder Matt den Dekker from Triple-A Las Vegas. Obviously, that trio of minor leaguers could serve as replacements for the three known players on waivers.

Byrd, who turns 36 on Friday, is having a surprising career year despite his age. He drew significant interest prior to the July 31 non-waiver deadline, but the Mets opted to hang onto him. In 464 plate appearances, he's batting .285/.330/.518. His 21 homers and 136 OPS+ are both career-bests. Byrd is no longer a regular center fielder (just two games there in 2013), but his defense in right field grades out to a solid +6.6 UZR/150, and The Fielding Bible pegs him at nine runs saved. As Rubin notes, just $130K remains on Byrd's 2013 salary, making him a highly affordable trade chip.

Buck, 33, has cooled off considerably following a meteoric start that saw him club 10 homers in his first 25 games (23 starts). Since May 1, he's hitting just .206/.290/.302 with six homers, limiting his value. However, Travis d'Arnaud is now drawing the majority of the time behind the plate, so the Mets would likely welcome the opportunity to clear the remaining $1.1MM of Buck's salary.

Feliciano, 37, returned to the Majors for the first time since 2010 on Aug. 2 and has allowed a pair of runs in 5 1/3 innings since. His health woes in recent years likely leave him without high trade value, but he'd be a nice alternative to Javier Lopez, whom the Giants reportedly aren't likely to trade even though he's been claimed on waivers. Opposing lefties are just 3-for-17 against Feliciano this season, and all four of his strikeouts have come against left-handed batters.

Rubin also writes that in addition to Byrd, Buck and Feliciano, the Mets are considering dealing Major League talent that is under control beyond the 2013 season.

It's been 731 days since the Mets traded Carlos Beltran to the Giants in exchange for Zack Wheeler, and while that trade looks brilliant now, it also represents the last July trade that involved the Amazin's. Here's more on New York's National League club…

The Tidewater Mets may just be the best team you've never heard of, writes Mark Bowman of MLB.com. With B.J. Upton and David Wright manning the left side of the infield, Ryan Zimmerman was forced to split time at second (with Mark Reynolds), and Justin Upton was relegated to bench duty. Of course, those Mets were a high school travel club. Now, through a combination of the draft, extensions, free agency, and trade, all of those players (excluding Reynolds) are stars on their respective National League East clubs.

After the R.A. Dickey trade, Blue Jays GM Alex Anthopoulos said the inclusion of John Buck was needed because his club needed to shed the catcher's $6MM salary. However, Mets assistant GM John Ricco told Adam Rubin of ESPNNewYork.com that Buck was part of the trade package from the beginning and not a late throw-in just even out money in the deal.  Buck is off to a hot start for the 2013 season and if he continues to perform, he'll be a solid contributor for the Mets this season.  Here's more from around baseball..