The Rangers and shortstop Elvis Andrus have officially signed a three-year extension. The deal, which doesn't include any options, is worth $14.4MM, Jon Heyman of CBS Sports reports on Twitter. The Boras Corporation represents Andrus, who was arbitration eligible for the first time this offseason and had a hearing scheduled for Thursday. Ken Rosenthal and Jon Paul Morosi of FOX Sports first reported the agreement. 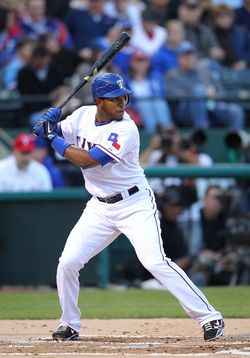 Andrus had filed for $3.6MM in arbitration, while the Rangers had countered with a $2.65MM submission, as MLBTR's Arbitration Tracker shows. The 23-year-old Venezuela native is under team control through 2014, so the deal buys out all of his arbitration seasons and no free agent years.