The Red Sox are among baseball's most disappointing teams so far this season, due in part to injury. Closer Andrew Bailey, outfielders Carl Crawford and Jacoby Ellsbury, and starters John Lackey and Daisuke Matsuzaka are among the players the team has lost for a significant length of time already in 2012. Boston also lost Kevin Youkilis, an important right-handed bat in their lefty heavy lineup. 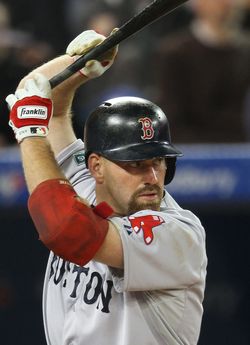 To make matters worse for Youkilis, the Red Sox have a ready-made third base replacement already in-house. Top prospect Will Middlebrooks has burst onto the scene with three homers and four doubles in his six games with Boston, continuing the hot streak that saw him hit nine homers in 24 games in Triple-A games before being recalled. Baseball America ranked Middlebrooks as the 51st best prospect in the game before the season, and the 23-year-old is doing his best to show the team he deserves to play the hot corner on the full-time basis.

The Red Sox owe Youkilis $12MM this season and hold a $13MM club option for his services next year ($1MM buyout). It's seems very unlikely that they'll exercise the option at this point, though the decision still isn't due for another seven months or so. A lot can change between now and then. Youkilis is in a difficult position as an injury-prone and declining player with a young hotshot rookie ready to take his job. If the Red Sox decline to bring him back in 2013, his stock as a free agent will be poor without a strong return from this latest back ailment.