Huston Street is off of the trade market and in the Padres' long-term plans. The team agreed to sign the 28-year-old right-hander to a two-year extension that includes a club option for 2015. The contract between the Padres and the Hendricks Sports client will be worth $14MM and the '15 option will be valued at $7MM, MLB.com's Corey Brock reports. 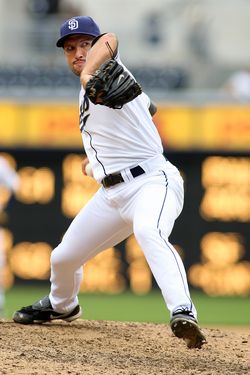 “Huston is an established closer and has proven to be a valuable leader and teammate,” GM Josh Byrnes said in a press release. “We are very excited to have him be part of this organization going forward.”

The Padres worked to lock Street up this week and were prepared to trade him if an extension didn't seem possible. Street's previous contract included a $9MM mutual option for 2013 ($500K buyout). He would have been a free agent following the 2012 season unless both sides had exercised the option.

This marks the second time in eight days that Byrnes has signed a potential trade candidate to a multiyear extension. The Padres agreed to sign Carlos Quentin to a three-year, $30MM extension one week ago today. Street, Quentin and Cameron Maybin now represent the Padres' largest financial commitments for 2013 and beyond.