The Cardinals have reached a contract agreement with lefty reliever Randy Choate, according to ESPN.com's Jayson Stark (via Twitter).  The contract is for three years, tweets Jon Paul Morosi of FOX Sports.  It's worth $7.5MM, according to WFAN's Sweeny Murti. 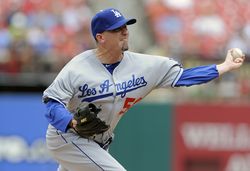 St. Louis had been seeking a left-handed specialist to pair with Marc Rzepczynski in its bullpen, and was said to be considering a number of options. The team fell out of the running on Sean Burnett earlier in the day.