The Rockies added a late-inning reliever and a pair of back of the rotation starters, electing to have a quiet offseason after hiring new manager Walt Weiss. 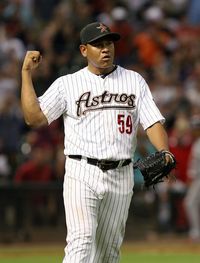 With a move back toward the more traditional five-man rotation, the Rockies certainly won't be giving 46% of their innings to the bullpen again in 2013.  Still, you can never have too many late-inning relievers, so the Rockies acquired Wilton Lopez from the Astros in what turned out to be the biggest move of their offseason.  The club acquired three years of Lopez's services, with Alex White the main piece going to Houston.  Certainly neither Rockies senior vice president of Major League operations Bill Geivett nor Astros GM Jeff Luhnow expected it at the time, but White will soon undergo Tommy John surgery.  The Phillies had nearly acquired Lopez (pictured) from the Astros in November, killing the deal after his physical, but the Rockies were more comfortable with his health.  The Rockies' bullpen seems in better shape this year, even with the losses of Reynolds and Roenicke.

The piggyback experiment aside, the Rockies simply had a terrible rotation in 2012.  Geivett addressed the rotation, in a sense, by re-signing Francis and adding Garland.  It's a low-risk, low-reward pair of signings, totaling just $2MM in guaranteed money.  Francis has become one of the game's softest tossers.  He led the team with just 113 innings last year, given their experiment.  An ERA around 5.00 seems like the best-case scenario for him.  The Rockies added another hittable hurler in Garland, who is bidding to make ten big league starts for the first time since 2010, due to shoulder injuries.  When they're right, these veterans can at least keep the ball on the ground, a Rockies mantra.

Geivett added additional depth on the cheap, picking up backup catcher Torrealba, reserve infielders Brignac and Wheeler, and starter-turned reliever Volstad.  The Torrealba signing allowed the Rockies to trade catcher Ramon Hernandez to the Dodgers, which nets the club about a million bucks plus whatever minor piece they can get for the already-designated Aaron Harang.

Perhaps Colorado's biggest move was not the Lopez trade but rather their managerial hire, Walt Weiss.  After Jim Tracy resigned, the team got in on the trend of hiring someone with no managerial experience.  Weiss, at least, should be on board should the front office decide to do something outside the box again.

The Rockies' rotation consists of Jhoulys Chacin, Jorge de la Rosa, Juan Nicasio, Francis, and Garland.  Though the group is off to a nice start for the first four percent of the season, it's hard not to view them as a massive question mark.  Even if the Rockies didn't like the free agent prices, there were three front-rotation types traded this winter in R.A. Dickey, James Shields, and Josh Johnson, plus some mid-rotation arms.  The Rockies' rotation doesn't have much in the way of name value, but perhaps they can sneakily land in the middle of the NL pack, as FanGraphs' rotation rankings suggested last month.

The Rockies also have uncertainty in the infield, with Chris Nelson and Josh Rutledge taking on full-time roles and Todd Helton not a great bet to top 100 games.

The Rockies did a pair of two-year extensions in the name of cost certainty, snagging arbitration years from Fowler and Chacin.  In the case of Chacin, I found it unnecessary.  Though he's the team's de facto ace, Chacin has shown a declining strikeout rate but a stable, high walk rate over his career.  He must continue to prevent hits to survive, a dicey proposition that did not hold up last year.  Why lock him in for $4.85MM in 2014?  The Rockies saved a little bit of money in the best case, but they've lost the ability to pay Chacin less if he has a lousy 2013.

The Rockies march to the beat of their own drum, and you have to respect that.  But even after a nice opening week, they look like a .500 club moving forward, and their quiet offseason is a factor there.  Still, with star power from Carlos Gonzalez and Troy Tulowitzki plus quality bats in Dexter Fowler, Michael Cuddyer, and Wilin Rosario, the Rockies can put some runs on the board if everyone stays healthy.  I'll enjoy watching to see if Walt Weiss' team can continue to defy expectations.