May 13: Danny Knobler of CBS Sports writes that Zambrano's name still doesn't appear on the Ducks' roster. Zambrano and the Ducks did indeed reach an agreement, according to Knobler's sources, but a contract has yet to be signed.

May 8: Righty Carlos Zambrano has signed with the Long Island Ducks of the independent Atlantic League, tweets Chris Cotillo of CLNS Radio.  MLB.com's Carrie Muskat has confirmed the signing (also via Twitter). 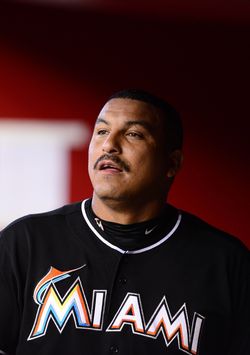 As Ducks president and GM Michael Pfaff recently explained to MLBTR's Zach Links, the team prioritizes winning but wants to "help players with their careers, help them continue their careers, and help them get back to the major leagues."  That's surely Zambrano's plan.  The 31-year-old righty joined the Marlins via trade in January 2012, posting a 4.49 ERA, 6.5 K/9, 5.1 BB/9, 0.61 HR/9, and 49.1% groundball rate in 132 1/3 innings (20 starts and 15 relief appearances).  Zambrano, a three-time All-Star, was a workhorse for the Cubs from 2003-07, averaging 215 innings per season.

From the '07 fight with teammate Michael Barrett, the five-year, $91.5MM contract signed that year, all kinds of odd ailments, the no-hitter in '08 against the Astros at Miller Park, the '09 on-field tantrum that led to a six-game suspension, problems with Cubs management, the move to the bullpen and back, the issue with Derrek Lee in '10 that led to a team-mandated suspension, his placement on the disqualified list in '11, to the salary dump trade to Miami, Z's final years as a Cub were tumultuous to say the least.