The Indians have announced the acquisition of left-hander Marc Rzepczynski from the Cardinals in exchange for minor league infielder Juan Herrera. 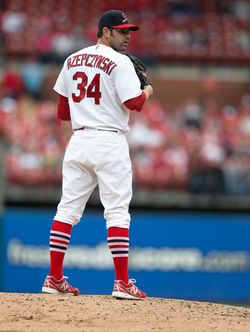 Rzepczynski will report to Cleveland tonight, and a 40-man roster move will be made to accommodate the team's new addition.

Rzepcynzski, 27, was optioned to Triple-A Memphis at the end of April after a rough start to the season. In Memphis, he posted a 3.33 ERA with 6.3 K/9 and 3.7 BB/9 in 44 innings of work — a significant improvement from the 7.84 ERA he's posted at the Major League level this season. Rzepcynski was recalled recently and has made a pair of July appearances for the Cardinals.

Rzepcynski, whose nickname is "Scrabble" (for obvious reasons), has been effective against left-handed hitters throughout his career, holding them to a .224/.298/.310 batting line over parts of five big league seasons with the Blue Jays and Cardinals. St. Louis acquired him in the 2011 Colby Rasmus trade. He is earning just $1.1MM in 2013 and can be controlled via arbitration through the 2015 season.

Cleveland GM Chris Antonetti said recently that his club has been on the lookout for bullpen arms that can retire left-handed hitters, and Rzepczynski fits that bill at a much lower cost than Javier Lopez and Josh Outman, both of whom also drew interest from Cleveland, according to ESPN's Buster Olney (Twitter link).

Herrera, 20, is batting .275/.366/.369 in 39 games for short-season Class-A Mahoning Valley. The Dominican native did not rank among Cleveland's Top 30 prospects, according to Baseball America.

Derrick Goold of the St. Louis Post-Dispatch was the first to report the agreement (on Twitter).