The Orioles have acquired right-hander Francisco Rodriguez from the Brewers in exchange for minor league infielder Nick Delmonico, according to a team press release.  Nolan Reimold has been transferred to the 60-day DL to create 40-man roster space in a corresponding move.

The 31-year-old Rodriguez signed a minor league deal with the Brewers in April and while he didn't make his season debut until May 16, he has been stellar ever since and even moved back into a closer's role due to John Axford's struggles.  Rodriguez is a perfect 10-for-10 in save opportunities and has posted a 1.09 ERA, 9.5 K/9 and 2.89 K/BB rate in 24 2/3 IP for Milwaukee this season. 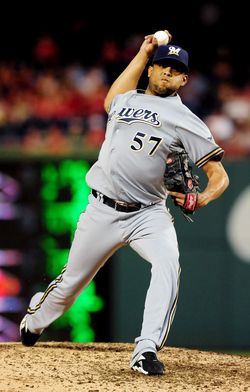 While "K-Rod" won't usurp Jim Johnson as Baltimore's closer, he does bring a wealth of big-game experience to the Orioles bullpen and gives the O's some depth behind Johnson.  As for the Brewers, Axford and Jim Henderson will get the majority of save chances, though both men have been whispered in trade rumors themselves.  You can keep track of Milwaukee's closer situation on MLBTR's sister Twitter feed, @CloserNews.

Delmonico was the Orioles' sixth-round pick in the 2011 amateur draft.  The 21-year-old has played first, second and third base in his brief pro career and owns a .244/.351/.471 line and 13 homers in 262 PA at the high-A ball level in 2013.  Baseball America ranked Delmonico as the fourth-best prospect in the Orioles' system before the season and praised his high baseball IQ and hitting tools, "though there's some length to his swing."  Delmonico projects as a corner infielder in the future as he doesn't have the fielding ability to stick at second base.

The Dodgers, Tigers and Red Sox had been linked to Rodriguez in recent days though the Orioles were one of several teams known to be scouting Milwaukee's relievers earlier this month.  Since Rodriguez may have been the best right-handed closing option available on the trade market, the Orioles have also done well to keep him away from teams who had more pressing needs at the back of their bullpens.