The Royals have acquired infielder Jamey Carroll from the Twins, tweets Phil Miller of the Star Tribune. Both teams have confirmed the trade and the Twins will receive a player to be named later or cash. 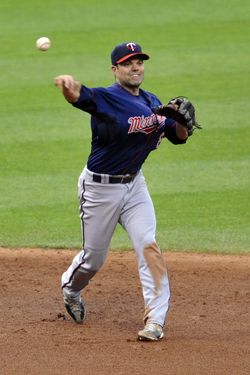 "I'm excited to go to a team that's been playing really well," Carroll told reporters including Mike Berardino of the St. Paul Pioner Press (video link). "I hope I can go there and contribute in a positive way. It should be pretty exciting. It's exciting to go and be in this situation."

The Royals, 7.5 games behind the Tigers in the AL Central and 4.5 games out of the second AL Wild Card spot, have lost a pair of second basemen to injury this month. Chris Getz was placed on the disabled list August 1 with a left knee sprain and Miguel Tejada landed on the DL today after suffering a right calf strain last night. Carroll has split his time between second base and third base for the Twins this year while posting a slash line of .230/.284/.262 in 202 plate appearances. Royals manager Ned Yost says Carroll "is a very solid player" and will play mostly at second, but will see time at third, tweets Pete Grathoff of the Kansas City Star.

Carroll is in the final season of a two-year, $6.75MM contract he signed with the Twins in November 2011. The deal includes a 2014 mutual option worth $2MM. MLBTR's Zach Links detailed recently the 39-year-old needs 401 plate appearances for the option to vest, so he needs 199 more to reach that mark. If the option does vest, Carroll can decide to take the guaranteed $2MM and remain in Kansas City or accept a $250K buyout and test the open market this offseason.