AUGUST 11: The White Sox have announced, via Twitter, Garcia is the player to be named later in the Rios trade. Garcia will report to Triple-A Charlotte and will most likely be a September call-up, before if needed, reports Dan Hayes of CSNChicago.com (Twitter links).

AUGUST 9: It looked like a long shot just hours ago, but the White Sox and Rangers have announced a trade that will send Alex Rios to Texas in exchange for a player to be named later. The White Sox are reportedly including $1MM to help offset some of the remaining money on Rios' contract. 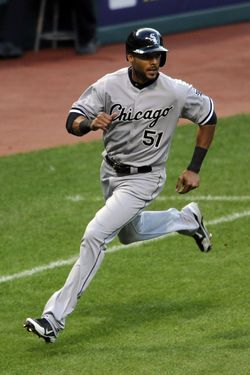 Dan Hayes of CSN Chicago feels that it's likely Leury Garcia will be the player to be named later at a time when he's not required to clear waivers to be moved (Twitter link). MLB.com's T.R. Sullivan agrees that Garcia will head to the White Sox, adding that the trade came together just minutes before the deadline to move Rios before his waiver period expired.

The Rangers claimed Rios off waivers earlier this week after expressing interest in him prior to the trade deadline. This is the second time that he has changed teams in August, as the White Sox originally acquired him from the Blue Jays back in 2009 in a down season when the Jays simply dumped his contract onto the White Sox. In parts of five seasons with the White Sox, Rios hit .269/.310/.430, offering solid defense in right field. He's also capable of playing center field in a pinch, though he hasn't done so regularly since 2011.

The 22-year-old Garcia is hitting just .192/.236/.231 in 57 plate appearances this season. The switch-hitter entered the season ranked as the Rangers' No. 20 prospect, according to Baseball America. In their scouting report, BA noted that Garcia is a near 80 runner on the 20-80 scouting scale and also possessed the best infield arm in Texas' system. His ultimate role may be a super utility player capable of handling second base, shortstop and center field, according to BA.