FRIDAY: The Pirates have officially announced the signing.

WEDNESDAY: The Pirates have agreed to terms with right-hander Edinson Volquez on a one-year, $5MM contract, according to Ken Rosenthal of FOX Sports (Twitter link). Volquez is represented by the Wasserman Media Group. 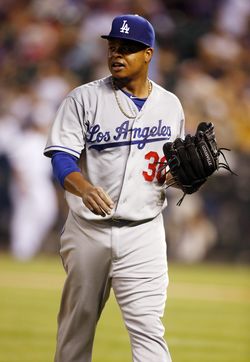 Buying low on Volquez continues a trend for the Pirates, who have picked up A.J. Burnett, Francisco Liriano and Mark Melancon via trade or free agency in recent years when each was coming off a poor season. The 30-year-old Volquez was released by the Padres last season after posting a 6.01 ERA with 7.3 K/9 and 4.4 BB/9 in 142 1/3 innings. He looked better in a brief, 28 1/3 inning cameo with the Dodgers, pitching to a 4.18 ERA with a 26-to-8 K/BB ratio.

Volquez's 4.07 xFIP was significantly lower than his 5.71 ERA on the season — a commonality that exists between he, Burnett, Liriano and Melancon at the time of their acquisition by the Pirates.

Volquez will join Liriano, Gerrit Cole, Wandy Rodriguez and the recently extended Charlie Morton in the Pirates' rotation. That seems to fill Burnett's spot in the rotation, suggesting that perhaps he's leaning toward retirement and the Pirates have moved on in favor of a cheaper option with similarly high upside. Back in 2008, Volquez finished fourth in the NL Rookie of the Year voting when he posted a 3.21 ERA with 9.5 K/9 and 4.3 BB/9 in 196 innings. Control has always been an issue for Volquez, but his fastball velocity has typically remained strong. After averaging 93.6 mph on his fastball from 2008-12, he averaged 92.5 mph in 2013.