JAN. 28: Joel Sherman of the New York Post reports the complex details of Garza's fifth year option (all Twitter links). The Brewers hold a $5MM option on Garza for the fifth year that will drop to just $1MM if Garza spends more than 130 days on the DL in any 183-day period throughout the life of the deal (183 days is the length of one regular season). However, the option will vest for Garza at $13MM if he pitches 110 games over the first four years of the deal, is not on the disabled list at the end of the 2017 season and throws at least 115 innings in 2017.

Sherman adds that Garza will also receive an additional $500K for reaching 190 innings and 30 games in each year of the deal. Each year of the contract contains $2MM in deferred money without interest.

Ken Rosenthal of FOX Sports notes (Twitter links) that the complex nature of the fifth-year option illustrates the Brewers' concerns over Garza's long-term health, and he adds that other teams shared those concerns.

JAN. 26: The Brewers drew plenty of criticism for not adding a single free agent on a Major League deal this winter, but that changed on Sunday when principal owner Mark Attanasio announced at the team's On Deck event that they've reached an agreement with right-hander Matt Garza. The Brewers have since announced the four-year deal with a fifth-year vesting option via press release. 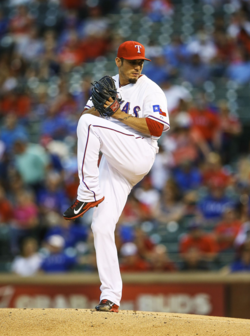 The contract reportedly guarantees Garza $50MM and contains a $13MM vesting option for a fifth year plus $4MM worth of incentives, meaning the CAA Sports client can earn up to $67MM over five years in Milwaukee.

GM Doug Melvin told the crowd (as tweeted by the Milwaukee Journal-Sentinel's Todd Rosiak), "I know we are a stronger team today." Melvin also said ironing out the contract details is what held up the announcement, Rosiak tweets.

This marks another late-offseason, impactful starting pitching signing from GM Doug Melvin and Milwaukee. Last year, the club nabbed Kyle Lohse on a three-year, $33MM deal after he languished on the market due to draft-pick compensation. As MLBTR's Tim Dierkes recently examined, signing free agents late in the offseason is becoming a habit for Melvin and the Brewers. Dierkes noted that 40 percent of Major League free agent deals issued by the Brewers over the past five seasons have come in January or later, and this contract boosts that number to 42 percent (11 of 26). This instance is different than all others, however, as the club will give Garza the largest guarantee it has ever made to a free agent.

Garza will not cost the Brewers draft pick compensation, as will be the case for fellow top arms Ervin Santana and Ubaldo Jimenez. Given the draft-pick drag on their value, Garza's deal could temper expectations for those two starters.

MLBTR's Steve Adams profiled Garza after the 2013 season, predicting that he would land four years and $64MM on the open market. While he got the years, Garza fell $3MM per year short of that salary target. In the end, Garza will receive only a $3MM greater guarantee than that given to Ricky Nolasco by the Twins for the same term. He lands an identical pact (in terms of dollars and years, at least) to the contract Edwin Jackson signed last year with the Cubs.

Garza's strong track record on the hill has been accompanied by injury questions that presumably limited his value on the open market. As Adams detailed, Garza suffered a stress fracture in his right elbow as well as a lat strain. All said, Garza has only pitched 259 innings over the last two years.

Garza will add to a Brewers rotation that already featured Yovani Gallardo, Kyle Lohse, Marco Estrada and Wily Peralta. Each of those pitchers is controllable beyond the 2014 season (Gallardo's contract contains a $13MM option with a $600K buyout), meaning that Melvin and his staff may have effectively set the Brewers' rotation for the next two seasons by inking Garza. Though they'll face steep competition in the form of the Cardinals, Reds and Pirates, the Brewers figure to boast a solid rotation with full seasons from Ryan Braun and Aramis Ramirez, meaning they should fare significantly better in 2014 than they did in 2013.

MLB.com's Brewer Nation blog first reported Milwaukee's interest in Garza. Ken Rosenthal of FOX Sports was the first to report the agreement, pending a physical (via Twitter). The Brewers then issued a statement to say the deal was not quite finalized before Attanasio announced the sigining on Jan. 26. Rosiak relayed the info of Attanasio's announcement, and his colleague Tom Haudricourt tweeted the news of the fifth-year option and its role in delaying the deal. McCalvy tweeted the financial details, and Jon Heyman of CBS Sports tweeted that Garza will earn $12.5MM annually.