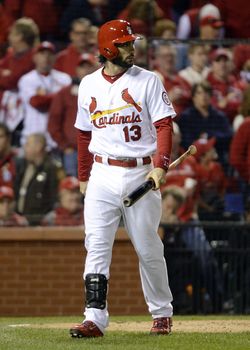 Earlier this week, it emerged that Carpenter and the Cardinals were close to an extension that could be worth $50MM-$55MM. Carpenter does not become arbitration-eligible until next offseason and is not eligible for free agency after 2017. Carpenter got a late start on his MLB career, not emerging as a semi-regular player until 2012, when he was 26. That means that, even without an extension, he wouldn't be eligible for free agency until shortly before his 32nd birthday. For the Cardinals, signing Carpenter to an extension now may allow them to control Carpenter for two seasons beyond that, while keeping his arbitration-year salaries manageable. For Carpenter, an extension guarantees him at least one big payday.

Carpenter is coming off a banner season in which he hit .318/.392/.481 and posted 7.0 WAR as the Cardinals' regular second baseman. Carpenter also finished fourth in NL MVP voting, and FOX Sports' Ken Rosenthal notes that Carpenter's contract comes in a bit above that of the $51.5MM extension first-place finisher Andrew McCutchen signed prior to the 2012 season, when he too had between two and three years of service time. Carpenter's extension also comes one year to the day after the Cardinals signed Allen Craig for five years and $31MM; Craig also had between two and three years' service at the time of his deal.

Carpenter will shift to third for the coming season as the Cardinals make way for Kolten Wong at second. The Cardinals traded David Freese to the Angels this offseason in a bid to upgrade their defense, clearing a spot at the hot corner for Carpenter.

Derrick Goold of the St. Louis Post-Dispatch originally tweeted that Carpenter and the Cardinals had agreed to a deal. Jon Heyman of CBS Sports first reported that the deal was for $52MM. Ken Rosenthal of FOX Sports was the first to tweet the year-to-year breakdown of the contract.