The Pirates announced that they have acquired corner infielder/outfielder Jason Rogers from the Brewers in exchange for outfielder Keon Broxton and right-hander Trey Supak. 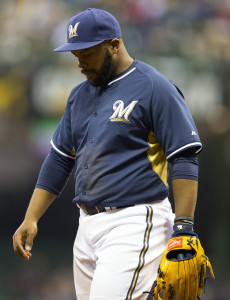 Rogers, 27, is a right-handed bat that will give the Pirates further depth at first base, although the club admittedly already had a right-handed hitting option there in the form of Mike Morse. In 169 plate appearances will Milwaukee last season, Rogers batted .296/.367/.441 with four homers. That marked Rogers’ first extended taste of the Major Leagues, as he’d previously accumulated just 10 plate appearances — all in 2014. Lack of MLB experience notwithstanding, Rogers is a highly accomplished minor league hitter, having compiled a lifetime .290/.372/.476 slash in the minors, including a more impressive .326/.406/.582 line in 90 games at the Triple-A level. Over the past two seasons, between the Majors and minor, Rogers has handled right-handed pitching better than lefties, though his track record prior to that indicates a more traditional platoon split.

In exchange for Rogers, the Brewers will receive a fleet-footed center fielder (Broxton) and a right-hander that was Competitive Balance (Round B) draft pick as recently as 2014 (Supak). Broxton, 26 in May, made his big league debut in 2015, though he received just seven plate appearances. Most of his work came in the minors, where he batted .273/.357/.438 with 10 homers and 39 stolen bases between the Double-A and Triple-A affiliates for Pittsburgh. The Pirates originally acquired him from the D-backs early in 2014 in exchange for cash considerations. The former third-round pick (2009) long rated as one of Arizona’s more promising farmhands in the eyes of Baseball America, but he hasn’t appeared on a Top 30 list for either the D-backs or Buccos since 2012, when BA wrote that while he was a plus runner with a plus arm that played MLB-caliber defense in center field even at Class-A Advanced, he struggles to pick up breaking pitches and has a long way to go at the plate. Broxton’s drawn high praise for his athleticism, and it’s possible that even if he doesn’t hit much, he could seemingly be a defensive-minded reserve outfielder.

Supak is 19 years old and rated as the Pirates’ No. 15 prospect, per MLB.com. Supak received a healthy $1MM signing bonus out of the ’14 draft but hasn’t lived up to that investment just yet, as he struggled to a dismal 6.67 ERA with a 23-to-5 K/BB ratio in 28 1/3 innings with the Pirates’ Rookie-level Appalachian League affiliate. MLB.com notes that his fastball sits in the low 90s and could grow as his 6’5″ frame develops. However, their scouting reports note that his curveball and changeup are a ways behind his fastball, and even his heater could use some work, as it presently lacks downhill plane.