The Minnesota Twins surprised the baseball world in 1987 when they finished first in the American League West with an 85-77 record – just one season after going 71-91. But they didn’t stop there; the Twins stunned Detroit (98-64 in the regular season) to win the A.L. Championship Series, then shocked St. Louis (95-67) to bring home a World Series title.

Just four years later, after a complete retooling of the pitching staff, the 1991 Twins rebounded from a last-place finish the year before to win the A.L. West. After dropping nine of their first 11 games, they started putting things together – and eventually went on a 24-3 tear from May 28-June 25 (including a 15-game winning streak). By the time that stretch ended, they found themselves atop the divisional standings – and never entered a day’s action the rest of the season looking up at anyone. After defeating Toronto in the ALCS, they outlasted Atlanta in the worst-to-first World Series to bring home another trophy. 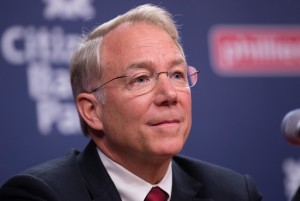 The architect of both championship clubs was Andy MacPhail, who was just 32 years old when he took over as Minnesota’s General Manager in August 1985. Now the President of the Philadelphia Phillies, MacPhail took some time to speak to MLB Trade Rumors about the 1991 Twins in this – the 25th anniversary of their last World Championship.

The pitching staff was completely overhauled between 1987 and 1991. The front three in 1987 were Frank Viola, Bert Blyleven and Les Straker; by 1991, Jack Morris, Scott Erickson and Kevin Tapani sat atop the rotation. Jeff Reardon was the closer in 1987; Rick Aguilera was in that role in 1991.

The best pitcher on the 1987 team – and the most recognizable – was Frank Viola, who earned World Series MVP honors that season and went on to win the A.L. Cy Young Award in 1988. The trade of Viola at the July 1989 deadline turned out to be a big reason why the Twins won the 1991 World Series, as three pitchers acquired for him – Tapani, Aguilera and David West – became key members of the Minnesota staff.

“At the time we moved him, we were in last place, and it felt like we needed some volume as opposed to one great starter,” MacPhail said. “We had a difficult negotiation after the ’88 season. He ended up signing a three-year agreement, but we were probably going to have another negotiation that would not be easy. We just felt it was time to make a move. When he went over to the Mets, he won 20 games and pitched well there. Given our circumstances, we were looking for volume. We got Kevin Tapani – who did a tremendous job for us and was an integral piece of the ’91 puzzle. And we were able to add David West, who ended up starting and relieving for us over the course of ’91. And then another critical piece was Rick Aguilera, who was our closer and filled an important void for us.”

From a fan standpoint, moving such a popular player and person as Viola had to be tough. MacPhail was asked if it was harder to remove him from the team because Minnesota was a small market club.

“That was a harder one to do. We ended up doing it right at the deadline on July 31st,” MacPhail said. “Back then, it was a midnight deadline. We did it with minutes to spare. It was not an easy decision by any stretch. I remember just wanting to have to sit down for a moment and sort of collect myself. Independent of the market size, it clearly was not an easy decision. It was not going to be popular, because you are trading a known for multiple unknowns to some degree. While I felt conviction that it was the right thing for us to make the trade … I wouldn’t say I was conflicted, but I recognized back then that of all the trades I had made in my career, this one was going to have the most riding on it. If it was not successful, it was going to come back and bite you personally – probably in a big way. You trade a potential 20-game winner to a New York club, you better be getting something back.”

A year and a half later, the Twins were playing in the 1991 World Series. Vindication, or still a tad conflicted?

“No, the end game object is to be the last club standing. We were able to accomplish that. The pitchers we acquired in that deal were big parts of it. So I felt the actions of the organization were justified,” he said.

The Twins were a last-place club in 1990 but added some key players in the off-season – notably Jack Morris. In order to land Morris, MacPhail offered the veteran a player option. As pointed out recently by New York Daily News writer Anthony McCarron in a story about Yoenis Cespedes and the Mets, MacPhail is credited with the creation of the modern-day player opt-out clause.

“I had been trying to sign him all off season, and I think our offer was three years, $9 million,” MacPhail said. “We were into February and he still hadn’t signed anywhere. I came to the realization that if we were going to sign him, I was going to have to sweeten the pot in some respects. So I gave him what would be a player option at the end of the ’91 season. That was, as far as I know, the first player opt-out. We were committed to three years at $9 million, but if he wanted to leave after one year, then he could. The justification in my mind for doing that was I wasn’t sure if we were able to sign him without it. It’s not like we moved early; it’s the first week in February, and he still hasn’t agreed with us. So I wanted to do something to assure getting him … At the end, the one thing I do remember about that season, Scott Erickson – out of our farm system – would end up winning 20 games and was probably the most dominant starting pitcher I’ve ever seen for the first third of that year. And Jack Morris, at age 36, was probably the most dominant pitcher I saw the last third of the season. Tapani was solid all year. At any point of the season, we had at the very least two very good starters in our rotation.”

As opposed to the overhaul of the pitching staff, the core group of position players from 1987 through 1991 was largely unchanged. Kirby Puckett was in the midst of his Hall of Fame career. Kent Hrbek, Greg Gagne and Dan Gladden were important players on the field and in the clubhouse.

“Free agent signing-wise among position players, we added Chili Davis – who had a tremendous year hitting out of the middle of the lineup for us,” MacPhail recalled. “Then out of our system we had Chuck Knoblauch, who filled a black hole at second base and wound up being Rookie of the Year that season. He was a tremendous addition. Just to reiterate on a theme, using all avenues to improve your club, Shane Mack – who had a tremendous year for us in rightfield – he was a Rule 5 draft selection. So when I look back on that team, I’m thinking as an organization, we literally employed every method we could to improve the team and make it successful.”

The Twins went to camp in 1991 with a roster that would carry them through the season – as they didn’t make any big in-season moves. MacPhail was asked how he realistically looked at the club he had constructed when the squad reported to Florida for spring training.

“Improved. But I don’t know that we thought we were going to be World Champions, because we had so many variables,” MacPhail said. “I know when we spoke to our owner, Carl Pohlad, about the importance of Morris – even though we had gone into February – we wouldn’t have pressed it and stayed with it and ultimately given him the player-out had we not thought that he was capable of getting us to another level. Not just to be .500, but potentially make the team competitive. We were much more surprised, frankly, with the dramatic rise of the ’87 team from ’86. I was pretty confident that, if the starting pitching held, that we’d be OK. I do think we felt we would be improved, but I don’t think anybody goes in and thinks, ‘Oh my God, we’ve got a World Series team.’ We all know too much for that.”

It’s 25 years later. MacPhail has been with a few other organizations (Chicago Cubs, Baltimore Orioles, Philadelphia Phillies). He’s had success. He was asked if it’s still as fun now as it was back then.

“The scrutiny is greater today, but the positive of that is that the fans are so knowledgeable that they’re going to critique you not just on your won-loss record, but they’re going to critique you on how efficient you are. Which in some respects is nice,” MacPhail said. “They’re just so much more sophisticated. It’s not just about what you’ve spent. There is so much information available to them, and they know a great deal more than what an interested fan could know back in ’87 or ’91.”