The Angels have acquired righty Jhoulys Chacin from the Braves, as first reported by David O’Brien of the Atlanta Journal-Constitution (via Twitter). Lefty Adam McCreery is going to Atlanta in the deal. 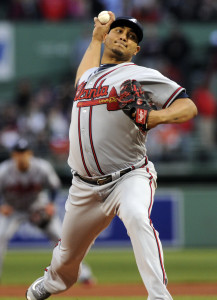 Chacin is owed $1.1MM on the minor league deal he signed with Atlanta this winter. That makes him a reasonably-priced addition for a Halos staff that has been devastated by injuries early in 2016.

A 28-year-old veteran of eight MLB seasons, Chacin has pitched to a 5.40 ERA in 26 2/3 innings over five starts this year. While that isn’t the most enticing mark in terms of run prevention, he has racked up 9.1 K/9 against just 2.7 BB/9 to go with a 48.1% groundball rate, leading ERA estimators to value his efforts thus far much more highly.

Of course, Chacin was only available on a meager commitment this winter because he’s lacked consistency at the major league level. There have been some notable highlights — including two seasons with nearly 200 innings and mid-3.00 ERAs while pitching at Coors Field — but Chacin has dealt with shoulder issues and proven susceptible to the long ball of late.

McCreery, 23, was a 22nd-round pick in the 2014 draft. He’s a tall and lanky reliever who has thrown 38 innings at the Rookie level over the last two years but has yet to make his 2016 debut. McCreery made strides in his second run at Rookie ball last year, striking out 28 batters in 28 2/3 innings while allowing just ten hits and five earned runs, but he still coughed up 14 free passes in that span. As Scout.com has explained, McCreery has high-powered stuff but has struggled to harness it with his huge frame.