The Mariners have acquired outfielder Ben Gamel from the Yankees, reports MLBTR’s Tim Dierkes (via Twitter). Shortly after Dierkes’ report, the teams announced the trade, adding that they’re sending right-handed pitchers Jio Orozco and Juan De Paula to the Yankees in return. 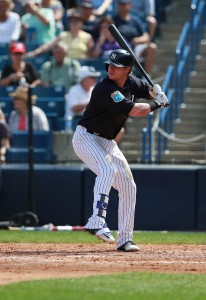 The 24-year-old Gamel is the younger brother of former Brewers top prospect Mat Gamel and made his Major League debut with the Yanks earlier this year in May. He’s logged just 10 plate appearances at the big league level (eight official at-bats), collecting one hit and one walk, but turned in a very solid season at the Triple-A level with the Yankees’ Scranton/Wilkes-Barre affiliate. In 533 plate appearances, Gamel batted .308/.365/.420 with six homers and 19 stolen bases while appearing at all three outfield positions.

Prior to this trade, Gamel rated 24th among Yankees prospects in the eyes of Jim Callis and Jonathan Mayo of MLB.com. That duo praised Gamel’s line-drive, all-fields approach at the plate and rated both his hit tool and speed as above-average, noting that while he lacks the plus speed of some center fielders he makes up for some of that with terrific instincts and quick reads off the bat. Gamel hit a career-high 10 home runs but is more of a threat to rack up doubles and triples — a skill set that would seem to fit well in Seattle’s spacious home park. Gamel figures to, at worst, profile as a fourth outfield candidate for the Mariners but could play his way into a bigger role if he’s able to carry over the success he’s enjoyed in 245 career Triple-A games (.304/.361/.447).

Of the two arms going back to the Yankees in this deal, Orozco appears to be the headliner. The 19-year-old rated 20th among Seattle farmhands, per Callis and Mayo, who praise the teenager’s “advanced feel for three pitches,” referencing the former 14th-rounder’s fastball, curveball and changeup. At 6’1″ and 208 pounds, Orozco is a bit undersized but has a more advanced feel for pitching than most prospects his age, per the MLB.com report. In 70 professional innings since being drafted last year (all of which have come with Seattle’s rookie-level affiliate in the Arizona League), Orozco has a 3.73 ERA with 11.2 K/9 against 2.6 BB/9.

De Paula, 18, signed with the Mariners as an international free agent out of the Dominican Republic and made his debut in the Dominican Summer League last year. He’s pitched alongside Orozco in the Arizona League in 2016, working to an impressive 3.07 ERA with 11.6 K/9 against 2.4 BB/9 in 41 innings (seven starts, four relief appearances).