The Dodgers are set to promote highly-rated pitching prospect Jose De Leon, according to reports from MLB.com’s Bill Shaikin (via Twitter) as well as Robert Murray and Jon Heyman of Fan Rag (Twitter links). He is expected to take the ball on Sunday. 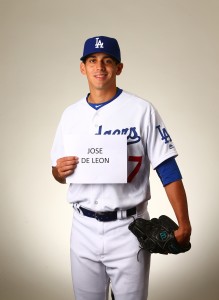 The 24-year-old came into the year with top-fifty overall prospect billing. Though he was handled cautiously early due to some health concerns, De Leon has done nothing but boost his stock since resuming action.

Over his 86 1/3 Triple-A frames thus far, the youngster has compiled a 2.61 ERA with 11.6 K/9 and 2.1 BB/9 while allowing only 61 base hits. The dominant showing represents the culmination of a remarkable developmental path.

A 24th-round draft pick out of Southern University and A&M College, De Leon did not start his professional career with any fanfare. And he didn’t really make it onto the prospect map until 2014. As Baseball America explained last winter, the righty has enhanced his athleticism, improved his mechanics, and honed his pitches significantly since the Dodgers added him to their system.

The BA scouting report notes that De Leon is able to spot his low-to-mid-nineties heater. He pairs that with a quality change and useful curve. MLB.com, which currently ranks De Leon the sixth-best right-handed pitching prospect in baseball, also crediting him with having worked hard to improve over the years.

Now, the Dodgers will test De Leon at the highest level of the game, beginning with an outing against the Padres. He’ll join fellow prized young talent Jose Urias on the MLB staff, and could end up playing an important role as the club seeks to hold off the Giants in the NL West.

While the delayed start to the year may not have been optimal in all regards, it does seem to mean that De Leon won’t have many restrictions down the stretch. He reached 114 1/3 innings last year, so he ought to be able to take the ball every fifth day and/or work into the postseason without any concern that he is being over-extended.