The Rockies announced that they’ve acquired right-hander Pat Neshek from the Phillies in exchange for minor league infielder Jose Gomez and minor league right-handers J.D. Hammer and Alejandro Requena. Lefty Tyler Anderson has been moved to the 60-day DL to clear a roster spot. 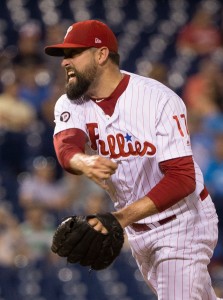 Neshek, 37 in September, has proven to be a strong offseason pickup for the Phillies, who effectively acquired the side-armer and his $6.5MM contract in a salary dump. Through 40 1/3 innings out of the Philadelphia bullpen, Neshek has averaged 10.0 K/9 and 1.1 BB/9 with a 37 percent ground-ball rate en route to a pristine 1.12 ERA. Neshek’s 13.6 percent swinging-strike rate is the best mark he’s posted since his rookie year with the Twins way back in 2006, and the paltry 24.5 percent hard-contact rate he’s allowed ranks as the 24th-best out of 163 qualified relievers.

In Neshek, the Rockies are adding a rental arm — Neshek is a free agent at season’s end — to a relief corps that has looked to show signs of fatigue in recent weeks. Colorado had a top-heavy bullpen that posted middle-of-the-pack results in April and May but has fallen off considerably since the calendar flipped to June. Over the past 30 days, Rockies relievers have posted a 4.74 ERA and a 4.92 FIP, each of which rank among the worst collective marks in baseball. Adam Ottavino and Jordan Lyles, in particular, have struggled as of late, but adding Neshek to the mix will give first-year manager Bud Black another quality arm to pair with the likes of Greg Holland and Jake McGee, taking some pressure off other arms further down the pecking order.

The 20-year-old Gomez ranked 21st in a deep Rockies farm system on the recently released midseason top 30 prospect list from Jim Callis and Jonathan Mayo of MLB.com. He’s played all over the infield but profiles best at second base in the long run, per that report, though he’s a ways off from the Majors anyhow after spending the bulk of the season in Class-A. Gomez is hitting .324/.374/.437 with four homers, 20 doubles and a pair of triples thus far in 2017. He’s also swiped 18 bases, though he’s been caught on another 11 attempts, suggesting that he needs further refinement in that area if he’s to be much of a threat on the bases later in his pro career.

In addition to having an excellent name, the 23-year-old Hammer boasts an outstanding strikeout rate thus far through the first year-plus of his professional career. The Marshall University product was Colorado’s 24th-round pick in the 2016 draft and has pitched to a 3.15 ERA with 12.3 K/9 against 2.6 BB/9 since joining the Rockies organization. Hammer, who has also posted a ground-ball rate north of 50 percent as a pro, has worked exclusively out of the bullpen, though he’s pitched in Class-A this season and is older than much of his competition. Fangraphs’ lead prospect analyst Eric Longenhagen tweets that Hammer possesses a plus fastball and average curveball but presently has below-average control.

Requena, 20, has worked as a starter at the Class-A level this season, totaling 117 innings across 19 starts with 7.5 K/9, 1.9 BB/9 and a 47.5 percent ground-ball rate. He’s demonstrated very strong control throughout his professional career to date and is enjoying solid results in his first year of full-season ball despite being nearly two years younger than the average age of his competition.