The Rangers have struck a deal to add righty Miguel Gonzalez from the White Sox, as Eduardo Encina of the Baltimore Sun first reported (Twitter link). Per the report, the Orioles were also attempting to bring back the veteran starter, but weren’t willing to meet the asking price. Infielder Ti’Quan Forbes will go to Chicago in return. The Rangers have designated righty Anthony Bass to open a roster spot. 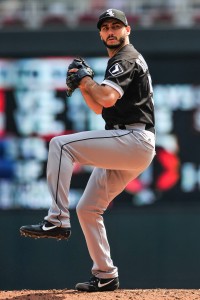 Though Texas isn’t exactly in prime position to snag a Wild Card berth — the team entered play today three games out and dropped its contest — it seems the club is at least interested in keeping that possibility open. Gonzalez will help bolster a rotation that no longer features Yu Darvish and has seen numerous other pitchers struggle. If they can crack the postseason, the Rangers will be able to utilize Gonzalez on their roster.

The White Sox have been quite aggressive in moving veterans, and Gonzalez now becomes the latest to go. The 33-year-old has been a steady presence since coming to Chicago after a four-year run in Baltimore. He’s earning $5.9MM this year — about $1MM of which remains to be paid — and will be a free agent at season’s end.

Despite the underwhelming peripherals, Gonzalez has typically managed to limit hard contact and suppress batting average on balls in play; opposing hitters carry a .278 BABIP against him over his six-year career. He doesn’t work with much velocity, but mixes five pitches and has managed to post a lifetime 3.88 ERA over 843 MLB frames.

Forbes only just turned 21 and was a second-round pick in 2014. But he has not really shown much yet as a professional. While playing mostly at third base this season, which he has split between the Class A and High-A levels, Forbes carries a meager .234/.281/.344 batting line with 11 home runs through 517 plate appearances.