NOV. 6: The Nationals have now formally announced that Wieters has exercised his player option.

NOV. 4, 8:19am: It “is not at all a done deal” that Wieters exercises his option, Chelsea Janes of the Washington Post tweets.  The catcher has yet to make a decision in either direction.

12:20pm: Matt Wieters intends to exercise his $10.5MM player option and remain with the Nationals in 2018, reports MLB.com’s Mark Feinsand (on Twitter). It’s not a surprising move for Wieters, considering the poor season he had in his first year as the Nationals’ primary backstop. 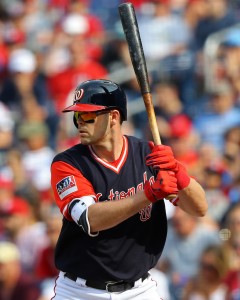 The 31-year-old Wieters inked a two-year, $21MM guarantee with the Nats last offseason, with the latter year of that contract coming in the form of a player option. However, Wieters posted career-worst marks in batting average, on-base percentage, slugging percentage and caught-stealing rate with the Nats this season, so it’s seemed all but certain that he’d forgo another chance at free agency for quite some time now.

Overall, Wieters batted just .225/.288/.344 with 10 homers through 465 plate appearances. He halted 25 percent of opposing stolen-base attempts, which is only slightly below the league average but is also well south of the career 33 percent mark he carried into the 2017 season. He also rated as one of the game’s bottom pitch-framing catcher, per Baseball Prospectus.

Even with Wieters back in the fold, it’d be a surprise if the Nationals didn’t pursue help behind the plate this offseason. Young Pedro Severino is the team’s top internal alternative, but the 24-year-old Severino batted just .241/.292/.332 in 59 Triple-A games last season.

Given the Nationals’ status as clear-cut contenders — especially in their final season of control over Bryce Harper — GM Mike Rizzo seems unlikely to head in the year with such a glaring question mark on his roster. Myriad trade opportunities could present themselves, and it’s also possible (speculatively speaking) that the Nats could make a run at either Alex Avila or Welington Castillo — the top two catchers on the open market. Avila, in particular, strikes me as a logical candidate; he can play some first base in the event of an injury to Ryan Zimmerman, and his left-handed bat would pair well with Wieters, who has consistently been a more dangerous right-handed hitter than left-handed hitter throughout his Major League career.