The Royals announced Monday that they’ve signed outfielder Michael A. Taylor to a one-year, Major League contract. A client of the newly formed ALIGND Sports, Taylor will receive a $1.75MM base salary and another $1MM worth of available incentives, reports Tim Brown of Yahoo Sports (via Twitter). In a corresponding move, the Royals have designated left-hander Foster Griffin for assignment. 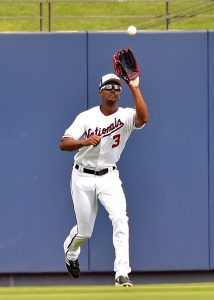 Taylor, 29, was outrighted off the Nationals’ 40-man roster at season’s end and elected free agency. He would’ve been arbitration-eligible for the final time this winter, and the Nats opted to cut him loose early rather than pay him a raise on last year’s $3.325MM salary following a rough 2020 season.

Once ranked as one of the game’s premier outfield prospects, Taylor has struggled to find his footing as a consistent contributor in the big leagues. He looked to have broken out with a very solid age-26 campaign back in 2017, when he slashed .271/.320/.486 with 19 homers, 23 doubles, three triples, 17 steals and brilliant center-field defense. Taylor played in 118 games that season and was still worth about three wins above replacement per both Baseball-Reference and FanGraphs.

Unfortunately, Taylor wasn’t able to replicate his success in 2018 or at any point thereafter. He’s logged 581 plate appearances in the three years since that time — often being shuttled between Triple-A and the Majors — while posting a tepid .225/.284/.370 output at the plate. His blend of power and speed is plain to see, but Taylor’s overall offense is limited by a sky-high 31.7 percent strikeout rate to this point in his career.

Taylor has continued to post strong defensive marks, with a superlative 26 Defensive Runs Saved and a 12.1 UZR/150 in 1984 innings as a center fielder from 2017-20. Even if his bat doesn’t recover, he should give the Royals a high-quality defender capable of playing all three outfield positions. Per Statcast, Taylor ranked in the 91st percentile of all big leaguers in terms of outfield jumps, and his 82nd percentile sprint speed speaks to the value he can add on the bases.

Taylor joins a Royals roster that was already deep in outfield-capable players, though several of them are surely to be used in the infield at times (or even regularly) in 2021. Whit Merrifield and Hunter Dozier, for instance, can each be used on the right side of the diamond or in the outfield. Dozier could be the club’s long-term first baseman, though that’s probably somewhat dependent on any decisions the club makes with Ryan O’Hearn and/or Ryan McBroom this winter. Merrifield, meanwhile, can play all across the outfield and is a strong defender at second base as well.

Beyond that versatile pairing, the Royals have Franchy Cordero, Edward Olivares, Bubba Starling, Nick Heath and top prospect Khalil Lee all on the 40-man roster. Taylor could function as a simple platoon partner for the left-handed-hitting Cordero, or if he’s able to again approach his 2017 level of play, he could earn a bigger role in an outfield mix that is still largely undefined.

Griffin, 25, was the No. 28 overall pick by the Royals back in 2014. He made his MLB debut this past season and tossed 1 2/3 shutout innings, but Griffin underwent Tommy John surgery in August and will miss the 2021 season as a result.

Beyond that, Griffin has never developed into the pitching prospect the club had hoped at the time of that lofty selection. He posted solid ERAs through the lower minors even while walking more than 3.5 hitters per nine frames, but Griffin’s results bottomed out as he further climbed the organizational ladder. He pitched to an ERA north of 5.00 in 152 2/3 frames of Double-A ball in 2018 and saw that mark increase during his 2019 stint in Triple-A Omaha.

The Royals will have a week to trade Griffin, release him or attempt to pass him through outright waivers. Because he’s a former first-round lefty with multiple minor league options remaining, another club could place a speculative claim, but it’d be tough to carry him on the roster for the remainder of the offseason knowing he won’t be able to contribute at all next season while he rehabs.