12:46pm: The Brewers are making Hart a priority, Berry told Haudricourt. However, Berry notes that there's been interest from other clubs and there will have to a fit for both sides.

7:57am: Free agent first baseman Corey Hart says his agent, Jeff Berry of CAA Sports, is likely to meet with the Brewers this week in Orlando, Tom Haudricourt of the Journal Sentinel writes. Hart, who missed the entire 2013 season and underwent knee surgeries in January and July, is likely to receive an incentive-heavy deal.

Haudricourt notes that the Brewers likely will not want to extend the sort of multi-year deal it would take to acquire James Loney to fill their first base void, and have not shown interest in Michael Morse. The Brewers could involve themselves in trade talks for first basemen like Ike Davis or Lucas Duda of the Mets, or Logan Morrison of the Marlins, but perhaps only as a backup plan if they can't re-sign Hart.

Hart had received interest from the Rockies, Red Sox, Rays and others this offseason, although the Rockies have since agreed to terms with Justin Morneau, and the Red Sox have agreed to re-sign Mike Napoli. The Pirates might be another logical fit. Hart, however, wants to stay in Milwaukee and has said that he would play at a discount in order to stick with the Brewers.

Here's the latest from around the NL West…

Corey Hart told Jim Bowden of SiriusXM (Twitter link) that his agent has talked with the Brewers, Red Sox, Rays, and Rockies amongst other interested teams.  Hart added that he won't officially get 100% medical clearance until December 3rd when he visits his doctor in Los Angeles, but he's fully healthy (link).

The CAA Sports client doesn't consider himself to be an injury prone player but admits that he's in a holding pattern until he's cleared physically, tweets Todd Rosiak of the Milwaukee Journal Sentinel (Twitter links).  Hart says that he's dropped 20 pounds and that he should be able to run around better than he had the past few years, so he'll be open to playing in the outfield (link).

Also from Rosiak, Hart says that a winning team would be nice, but he's a family man first and will do what he feels is best for them.  As MLB.com's Adam McCalvy points out in his transcript of Hart's interview, Harts and his family live in Arizona, which could factor into his decision.  McCalvy notes that of the four teams mentioned by Hart, the Rockies and Brewers both have Spring Training facilities in the Phoenix area.  The Spring Training facilities for Tampa Bay and Boston are each in Florida.

Hart last played in 2012, batting .270/.334/.507 with 30 homers, 35 doubles and four triples, illustrating why he can still be considered one of the most promising power bats on this year's free agent market even after missing the 2013 season.

The Mets are listening to offers on Ike Davis and Daniel Murphy, but are not aggressively shopping them at this point, according to Marc Carig of Newsday (via Twitter).  Here's more on the Mets…

The GM Meetings begin tomorrow in Orlando and run through Wednesday, but it could be a very quiet three days for the Brewers. "I don't anticipate us being overly active at this point but things could change," GM Doug Melvin told Tom Haudricourt of the Milwaukee Journal Sentinel. "There's not a lot of openings in the regular lineup." Budget constraints will also play a role in the Brewers' level of activity, according to Haudricourt, as the club is approximately $14MM under its 2013 Opening Day payroll (not including arbitration and pre-arbitration salaries). Here's more from Haudricourt's piece:

Here's the latest out of Queens.. 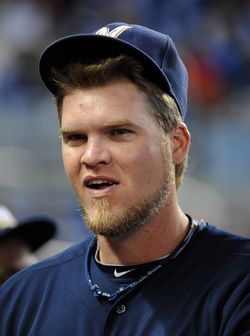 Corey Hart hasn't played a game for the Brewers this season but he hopes to make it up to them in 2014.  The outfielder/first baseman says that his preference is to stay in Milwaukee when his contract expires after the season, and he is willing to take a pay cut to make that happen, writes Tom Haudricourt of the Milwaukee Journal-Sentinel.

Hart has been sidelined for all of 2013 while undergoing surgery on both knees and even when taking the loyalty out of the equation, it didn't seem likely that he'd find a deal to match his $10MM salary from this season.  While Hart has told the club "numerous times" that he wants to stay put, he has yet to have discussions about a new deal.