The Mets will promote first base prospect Dominic Smith to the majors on Friday, general manager Sandy Alderson told reporters, including Marc Carig of Newsday (Twitter link). Smith will follow shortstop Amed Rosario as the second well-regarded prospect to join the out-of-contention Mets since the non-waiver trade deadline passed July 31. 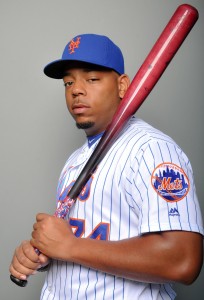 The extended wait for Smith came thanks in part to the Mets’ logjam of veteran position players, but they mitigated that in recent weeks by trading first base options Lucas Duda and Jay Bruce. When they dealt Bruce to the Indians on Wednesday, it became obvious that the 22-year-old Smith would be bound for the majors sooner than later.

Smith is among the game’s top 50 prospects, according to MLB.com and Baseball America, with the former noting in its free scouting report that he has lived up to the hype that accompanied him as a first-round pick in 2013. The lefty-swinger owns “a very advanced approach at the plate” with “outstanding defensive ability,” per MLB.com, which touts Smith as a potential everyday first baseman.

Smith got his first taste of Triple-A action this year and slashed a terrific .330/.386/.519 with 16 home runs in 500 plate appearances. While he had the benefit of playing in both the extremely hitter-friendly setting of Las Vegas and the offense-driven Pacific Coast League, Smith still posted a line 33 percent better than the PCL average, according to FanGraphs’ wRC+ metric. He was similarly effective at lower levels from 2013-16.

Seattle acquired first baseman Yonder Alonso from Oakland in a waiver trade on Sunday. It turns out the Mariners had been pursuing Alonso since before the non-waiver deadline on July 31, general manager Jerry Dipoto told reporters, including Greg Johns of MLB.com. Dipoto “couldn’t quite push it over the goal line,” though. The executive went on to suggest that Alonso, an impending free agent, could be more than a rental for the Mariners. “In this case, it’s a guy who fits us not just now, but potentially moving forward. What better way to get to know a player than have him join you?”

More on Seattle and a pair of National League clubs:

The Mets will promote top prospect Amed Rosario for tomorrow’s game against the Rockies, general manager told reporters this afternoon (Twitter link via Newsday’s Marc Carig). He’ll play shortstop at Coors Field in his Major League debut. Tyler Kepner of the New York Times tweets that the GM said first base prospect Dominic Smith is “not far behind.”

Rosario, 21, was ranked by ESPN’s Keith Law as the No. 1 prospect in baseball in his midseason update of the game’s 50 best prospects. He rated fourth on Baseball America’s midseason Top 100 and second on the midseason top 100 over at MLB.com. 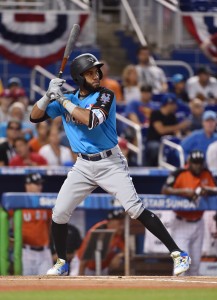 Thus far, Rosario has slashed an impressive .328/.367/466 with seven homers, 19 doubles and seven triples in 425 plate appearances while playing in the hitter-friendly Triple-A Pacific Coast League (specifically, in a favorable Las Vegas setting). He’s also swiped 19 bases in 26 tries, showing off the wheels that have earned him plus ratings in many scouting reports.

Rosario is regarded as a plus defender at shortstop with a plus hit tool and some potentially emerging power. (His seven home runs are already a career-high.) Scouting reports agree that he’s a slam dunk to stay at shortstop where he should provide the Mets with anywhere from above-average to superlative defense for the next several years.

While the Mets’ somewhat crowded infield picture still features veterans Jose Reyes, Asdrubal Cabrera and Neil Walker, it seems all but certain that Rosario will be given the chance to play on a daily basis in the Majors. Walker and Cabrera are definite August trade candidates via the trade waiver process. However, even if that pair remains in Queens for a good portion of the month — or even all of the month — it’s in the Mets’ best interest to ensure that Rosario takes the field at shortstop on an everyday basis as opposed to navigating the difficulties of inconsistent playing time as a part of a time share.

Even if Rosario is in the Majors for the remainder of the 2017 season, the most service time he can accrue will be 62 days. That’ll leave him well short of Super Two trajectory and will put him on pace to reach arbitration eligibility following the 2020 season and free agency upon completion of the 2023 season.

The Diamondbacks could be in for bad news regarding right-hander Shelby Miller, who, as Barry M. Bloom of MLB.com tweets, exited his start Sunday with forearm tightness. Arizona is scheduling an MRI for Miller, who lasted four-plus innings and allowed three earned runs in a loss to the Dodgers. Manager Torey Lovullo is trying to be optimistic, notes Bloom, but Steve Gilbert of MLB.com observes (on Twitter) that the situation is “not good.” Forearm tightness often portends Tommy John surgery, which would be the biggest setback yet in Miller’s rocky tenure with the Diamondbacks. The club’s previous regime drew seemingly endless criticism for sending a Dansby Swanson– and Ender Inciarte-led package to the Braves for Miller two winters ago. General manager Dave Stewart and senior vice president of baseball operations De Jon Watson lost their jobs last fall after Miller struggled through a 2016 to forget, pitching to a 6.15 ERA in 101 major league innings and enduring a demotion to the minor leagues. Thanks in part to improved velocity, though, Miller has fared respectably this year with a 4.09 ERA and 3.29 FIP in 22 frames.

10:54pm: The Rangers could view a strike for Lucroy as a way to improve their pitching, given his highly-regarded work behind the plate, per Evan Grant of the Dallas Morning News. With Texas finding high asking prices on the pitching market, the report suggests, the club could make a move for a group of Milwaukee pieces that might include Lucroy, a quality reliever, and possibly even a starter.

3:41pm: There’s a mystery team involved on Lucroy, tweets Jon Heyman of Fan Rag, and it isn’t the Red Sox or the Mariners. Those two clubs would certainly have been among the plausible suitors for the veteran.

2:49pm: The Braves have inquired on Lucroy, according to Rosenthal (via Twitter). At present, though, it doesn’t appear as if the sides are likely to strike a deal. Atlanta’s interest is limited, it seems, because it would need to extend the veteran receiver in order to justify trading him.

The teams is “wary of paying twice” — first in the swap, then in a hypothetical extension — though certainly that’s the price of poker when  just a fact of life for a club that would competing with teams that have a much higher present need for a top-quality backstop. It’s no sure thing, either, that Lucroy himself would agree to a new contract.

12:29pm: Yesterday, Milwaukee asked teams with interest to make offers of a certain “minimum standard,” Ken Rosenthal of FOX Sports reports (Twitter links). It’s not entirely clear whether the request was for best and final offers, but Rosenthal adds that discussions are still taking place.

Among several teams to put their chips on the table are the Mets, per the report. With the Brewers still evaluating their options, multiple teams remain in the hunt.

11:27am: Jonathan Lucroy is one of the most talked-about names on the trade market right now, and ESPN’s Jerry Crasnick adds some context to the complications in working out a deal, reporting the eight teams to which Lucroy can block a trade (Twitter link). Lucroy can block trades to the Twins, Angels, Athletics, Padres, Mariners, Nationals and, most interestingly, the Indians and Tigers. Both of the two latter teams have been connected to Lucroy in trade rumors this week, though both Crasnick and his colleague Jayson Stark were told this morning that the Tigers are no longer in the picture (links to Twitter).

Cleveland’s presence on Lucroy’s no-trade list certainly doesn’t preclude a deal from happening — Lucroy has candidly stated to the media that he wants to play for a contending team on multiple occasions in the past six months — but it does further complicate matters for the Indians. While Lucroy’s postseason aspirations could make him willing, to some extent, to waive his no-trade rights, he could also wield that clause as leverage in an attempt to coerce the Indians into an extension or, at the very least, restructuring his contract to give him a raise on next year’s wildly affordable $5.25MM salary.

The Indians are said to be discussing Lucroy and left-hander Will Smith with the Brewers, but they face competition even if the Tigers and Astros are out of the market, as has been reported recently. The Rangers, Red Sox and Mets — none of whom are on his no-trade list — have all still been linked to Lucroy, and a premium player of his value figures to draw widespread interest. (Indeed, FanRag’s Jon Heyman last night again mentioned a mystery team in the mix.) The Mets were said to offer a package centered around Travis d’Arnaud, which was quickly dismissed, but FOX’s Ken Rosenthal reported last night that the two side “re-engaged” on trade talks. ESPN New York’s Adam Rubin adds a bit more detail to that story this morning, reporting that the Brewers circled back with the Mets and proposed a counter-offer that “was not out-of-hand rejected.” The Mets, he notes, have no intention of dealing either shortstop prospect Amed Rosario or first base prospect Dominic Smith, though.

With right-hander Matt Harvey’s season over thanks to thoracic outlet syndrome, the reigning National League champion Mets are unsure if it makes sense to deal prospects for major league help at this year’s trade deadline, according to the New York Daily News’ John Harper. “There’s a lot of grey area right now,’’ a Mets source told Harper. Only two Mets prospects – shortstop Amed Rosario (No. 18) and first baseman Dominic Smith (No. 76) – cracked Baseball America’s just-released midseason top 100 prospects, notes Harper, who points out that the 47-40 team lacks blue-chip pipeline talent to trade. Harper’s also skeptical of the quality of starters set to move by the deadline, though he adds that the Wild Card-holding Mets might be willing to part with Smith for a capable rotation piece.

More on New York and four other NL cities: