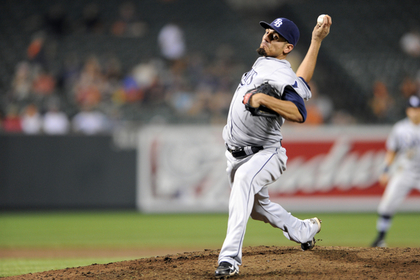 Garza joins Ryan Dempster, Tom Gorzelanny, Randy Wells, Carlos Zambrano and Carlos Silva in a crowded Chicago rotation. It wouldn't be surprising to see Cubs starters appear in trade rumors before long. If any team could afford to spare a starter, it was the Rays, who still have David Price, James Shields, Jeff Niemann, Wade Davis and Jeremy Hellickson. The return from the Cubs doesn't impact Tampa's Opening Day roster, but it adds depth to the Rays' already impressive farm system.

Baseball America ranked Archer first among Cubs prospects this offseason while Lee placed fourth and Guyer placed tenth. Archer, a 22-year-old right-hander, made it as high as Double-A last year. The starting pitcher posted a 2.34 ERA with 9.4 K/9 and 4.1 BB/9, limiting opponents to 6.4 H/9. The Cubs acquired him from the Indians just over two years ago in the Mark DeRosa trade. Jim Callis of Baseball America notes that Archer is a year away from the majors and could be a closer in the future (Twitter link).

It's not a great time to be an up-and-coming shortstop in the Cubs organization, as Starlin Castro figures to be the team's shortstop for years. Lee, who was born seven months after Castro, is also a highly-regarded shortstop. The native of Korea has a .299/.370/.375 line with 57 stolen bases in two pro seasons. When Baseball America ranked Lee sixth among Cubs prospects before the season, the publication described him as a gifted hitter with the tools to make difficult defensive plays.

Guyer, who turns 25 this month, posted a .344/.398/.588 line in 410 plate apperances at Double-A last year. He has played all three outfield positions in his four-year minor league career.

ESPN.com's Buster Olney hears from a talent evaluator that the Rays' haul gives them depth, but not necessarily impact players (Twitter link). MLB.com's Jonathan Mayo agrees and notes that Archer and Lee have some good upside (Twitter link).