Bullpens don’t get much better than the one the Padres had last year. Led by Heath Bell, Mike Adams and Luke Gregerson, Padres relievers combined for over 500 innings of 2.81 ERA ball, averaging more than one strikeout per inning while allowing the fewest walks per frame of any MLB bullpen. But the Padres had weaknesses elsewhere and teams were interested in San Diego’s relievers, so GM Jed Hoyer faced a decision last offseason. 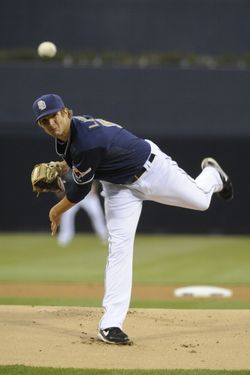 “We traded a bunch of quality arms, but that was our area of depth,” Hoyer told MLBTR. “We were quite weak up the middle a year ago.”

So the Padres parted with five of their relievers in the deals that brought Cameron Maybin and Jason Bartlett to San Diego. Gone are Edward Mujica, Ryan Webb, Cesar Ramos and Adam Russell, four pitchers who combined for 152 2/3 MLB innings last year, and Brandon Gomes, who struck out 93 batters in 72 1/2 Double-A innings and is now in the majors with the Rays.

The results – at least to this point – have Padres relievers among the league leaders in a number of categories. They’re first in MLB with a 2.10 ERA, second with 124 innings and 3.0 BB/9 and fourth with a 3.34 xFIP. (However, the relievers’ home run per fly ball rate is just 4.0% and opponents are hitting only .265 on balls in play, so luck appears to have been on the Padres’ side so far).

Bell, Adams and Gregerson are back, which gives manager Bud Black three premium options to call on. Southpaw Cory Luebke, who made all of four appearances in 2010, leads San Diego relievers with 19 2/3 innings this year (9.6 K/9, 3.2 BB/9, 3.66 ERA, 47% ground ball rate). Developing relievers like Luebke (pictured) and finding others on waivers or in free agency has helped the Padres replace Webb, Mujica and others.

“Our biggest challenge has been trying to replenish the depth we lost by trading so many arms,” Hoyer said. “That is something that we continue to do and will be an ongoing issue.”

A lot is going wrong for the Padres, who have slipped to the bottom of their division and are last in the National League in scoring. But their offseason trades are paying off, as they strengthened his team at two premium positions without weakening their bullpen.