The Cubs' first-ever Japanese player is heading to Cleveland.  The Indians acquired right fielder Kosuke Fukudome and about $3.9MM from the Cubs today for minor leaguer outfielder Abner Abreu and reliever Carlton Smith.  With Shin-Soo Choo and Grady Sizemore on the DL, the Tribe has a clear need for outfield help, and Fukudome was willing to waive his no-trade clause to join the AL Central contender.  For the second summer in a row, Cubs GM Jim Hendry is taking on salary to ship out overpaid veterans. 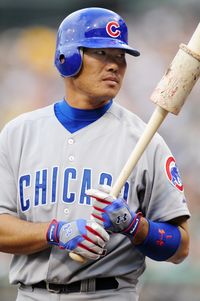 Fukudome, 34, is hitting .273/.374/.369 in 345 plate appearances for the Cubs this year.  He leads the NL with 4.34 pitches per plate appearance.  Though his right field defense drew praise initially, Fukudome has been below-average per UZR over the last few years.  He is owed almost $4.7MM for the balance of the season, and the Cubs will pay all but $775K of that.  Fukudome signed a four-year, $48MM free agent deal with the Cubs in December of '07 after spending his career in Japan with the Chunichi Dragons.

Fukudome cannot be offered arbitration after the season, so draft pick compensation was not a factor.