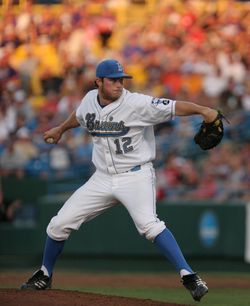 Cole stands 6'4" and doesn't turn 21 until the fall. He throws a slider and change-up, plus a fastball that regularly reaches the mid 90s. However, his stuff didn’t translate into the statistical success you’d expect for a first overall pick (teammate Trevor Bauer posted more impressive numbers). Cole finished the season with a 3.31 ERA, 119 strikeouts and 24 walks in 114 1/3 innings – impressive numbers, but certainly not Strasburg-esque.

I spoke to Cole earlier this year; here's my interview transcript.

You can keep track of which top picks have signed with MLBTR's list.