The Red Sox have acquired Andrew Bailey from the Athletics in a trade that will send Josh Reddick to Oakland and Ryan Sweeney to Boston, the teams announced. First base prospect Miles Head and right-handed pitching prospect Raul Alcantara are going to Oakland in the deal. 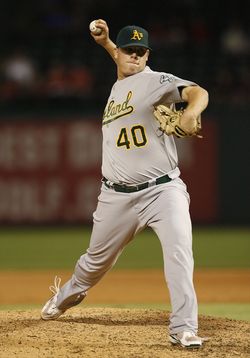 Reddick, 24, posted a .280/.327/.457 line in 278 plate appearances for the Red Sox this past season. The left-handed hitter got his first extended shot at Major League pitching in 2011, after posting a .278/.332/.500 line in parts of five minor leagues seasons. Reddick has big league experience at all three outfield positions and figures to get the chance to play every day in Oakland. He's under team control through 2016 and won't be arbitration eligible until after the 2013 campaign.

Sweeney, 27 in February, played all three outfield positions for the Athletics in 2011, posting a .265/.346/.341 line in 299 plate appearances. He has experience in parts of six big league seasons and will remain under team control through 2013. Sweeney's career UZR/150 of 9.2 suggests he's an above-average defender, and his numbers in right field are particularly impressive. MLBTR projects a 2012 salary of $1.6MM for Sweeney through arbitration.

Sweeney's a left-handed hitter who has a solid career line of .296/.352/.402 against right-handed pitching. However, GM Ben Cherington may want to pair him with someone who can hit left-handers given his career .233/.306/.289 line against southpaws. Ryan Kalish and Darnell McDonald (.285/.348/.451 career line against lefties) are internal candidates for the Red Sox to consider and right-handed hitting free agents Ryan Spilborghs and Cody Ross could also be fits.

Bailey will join the recently-acquired Mark Melancon in a new-look Red Sox bullpen. Boston may move  Daniel Bard to the rotation and Alfredo Aceves might also start, but Matt Albers, Scott Atchison, Bobby Jenks and Franklin Morales are candidates to contribute out of the bullpen in 2012.